The Climate of Argentina

Average Rainfall in Argentina by Giornorosso / Wikimedia Commons / CC BY 3.0

The climate of Argentina varies dramatically, as Argentina is approximately 3800 km long from north to south, which is only a little bit “shorter” than Canada. It’s the 8th largest country in the world. So the climate really depends upon where you are in Argentina. Like Canada, Argentina has four seasons. However, since Argentina is in the southern hemisphere, their seasons are the reverse of ours.

In the south there is snow and frost. In the central and northern parts of the country the weather is milder (except in the mountains, where it can get cold).

In the north it gets rainy, but in the Andes it is extremely dry.

Argentinian springs have mild to warm days with cool nights.  The south and the Andes have significantly cooler days and nights than the rest of the country.

The Atlantic coast gets the most rain in the spring.

In the north the summers are comparable in daily highs to central Canada. It is somewhat cooler in the centre of the country and on the Atlantic coast. The south remains cool throughout the summer, though there are occasional days of extreme heat.

In the summer, the north of the country gets lots of rain whereas the south gets virtually none. The Atlantic coast gets some rain as well.

Autumn – March to May

Autumn is mild throughout the country, though cooler in the south.

The northeast of Argentina is the rainiest during this season.

Average Temperatures in various locations in Argentina in °Celsius

Is a hot and dry area in the north of the country. It can get humid but only in the summer, when temperatures regularly get into the high 30s. Winters are extremely mild, with temperatures reaching the 20s.

Cuyo is the wine region of Argentina. The weather here is comparable to the warmer (and drier) parts of southern California. However, due to massive changes in altitude, the highest parts of the area can see frost throughout the entire year. The lower areas have warm days and cold nights.

Most of the rain falls during the summer, between October and March.

Mesopotamia is a sub-tropical area in north eastern Argentina that does not have a dry season (so bring your umbrella). In most parts of the region temperatures are in the 20s for most of the year. It’s humid and rains a lot, but slightly less in the winter.

The summers are somewhat wet, but nowhere near as rainy as the rest of the north of the country. There is virtually no precipitation in the winter, however a few parts of the region do get winter storms.

The Pampas is perhaps the most famous region in Argentina and the second biggest. Because of its weather, it is the most populous. (Buenos Aires is located on the coast of the Pampas.) The climate is temperate and humid, with lots of raining and, as a result, it’s the country’s agricultural region. Summers are hot and long, though on the coast, where all the beaches are, they are slightly cooler.

The northern part of the Pampas gets well over twice as much rain as the southern areas, but no part of the area ever experiences a dry season. Thunderstorms are common throughout the summer. There is frost in the winter.

The other famous region of Argentina is Patagonia, which makes up nearly half the country while containing less than 5% of the total population. So it is almost like a milder version of the Canadian territories. Because of the size of Patagonia, the climate varies widely.

The entire area has cooler summers than the rest of Argentina, however the northern areas – both along the coast and in the Andes -get temperatures into the high 20s in some places. The extreme south of the region only gets a couple days of 20+ weather every summer.

The entire region experiences winter, with every part of the region seeing frost and some snow (snow is relatively sparse in the lower regions, however).

The official language of Argentina is a dialect of Spanish, but there are a number of competing dialects throughout the country: 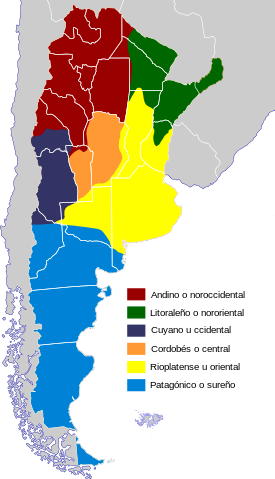 Canadian citizens do not need a visa to travel to Argentina, however they do need to pay the “reciprocity fee” of US$92 before traveling to Argentina. You can pay the fee online here.

If you are a Permanent Resident of Canada and would like to know more about visas to Argentina, please let us know by using the form below.