The Climate of Bangladesh 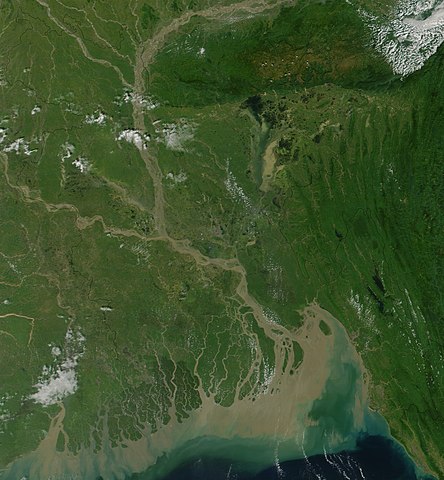 Bangladesh is on the Tropic of Cancer and so has a Tropical Monsoon Climate, with three seasons. Most of the country is a flat river delta that is prone to flooding. There is very little variation in climate throughout the country.

The winter in Bangladesh features warm to hot temperatures and relatively little rain. The temperature rarely falls below 18C during the "winter." In fact, Bangladesh has never recorded sub-zero temperatures in recorded history.

The summer weather in Bangladesh actually occurs in what we would think of as Spring. The weather is warmer than in the "winter" and there is a lot more humidity.

Most of Bangladesh receives 2300 mm or more of rain each rainy season. (though the southeast receives a lot less.) For comparison's sake, Vancouver gets about 1,100 mm per year. The rainiest parts of the country can get between 3,200 and 4,700 mm of rain. That is an incredible amount of rain. This is probably not the time of year you want to visit.

Dhaka, the capital city, has a fairly representative climate for Bangladesh, though it doesn't get as much rain as the northeast.

Compared to the rest of the Indian sub-continent, Bangladesh is a pretty culturally uniform place.

Bangladesh has one ethnicity and one language but a number of different religions (even though the state is officially muslim).

Currently, Canadian citizens can purchase their visas upon arrival in Bangladesh, provided you are visiting Bangladesh for tourism or business purposes. If you are a Canadian Permanent Resident and would like to see more information about Bangladesh and its visas, please let us know by completing the form at the bottom of this page.