There's a reason India is often referred to as a "sub-continent" – it's so large that it has the climate variations of a continent. You can see the wide variation in this map: 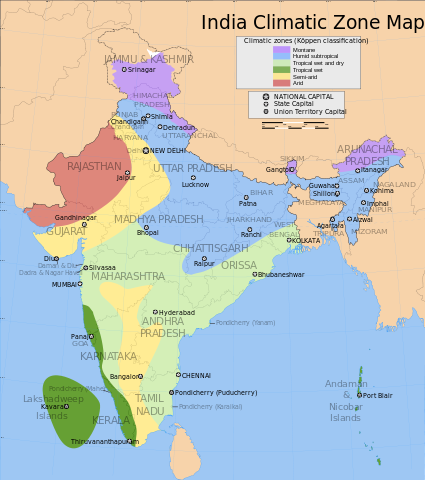 The climate of India can be divided into four major regions:

There are three climates groups together under the dry category:

A little bit of rain in the summer – sometimes no rain for a few years. Temperatures in the mid 30s in the summer. Below the is the climate information for Jaipur, the biggest city in the Indian desert:

This area is east of the Great Indian Desert. It's not quite as hot and gets a little more rain. Below is the information for New Delhi, which is in this region:

This climate is found in the central parts of southern India. There's a little more rain in the summer compared to the above regions. The seasons are rainy and dry, like other places in the tropics. Below is the climate data for Bangalore, the most populous city in the region:

Shockingly, for a a country that shares the highest mountains in the world, the climate is very different in the extreme north of India. But claiming there is one climate in this area is simplistic, as the temperature drops over half a degree for every 100m you climb, leading to a gigantic difference in temperature between the lower highlands and the peaks.  The amount rain or snow depends on the location in the Himalayas. The north side is dry, but gets snow in winter and spring. The southern side gets a lot more precipitation. Rain is most common between 1000m (3,200ft) and 2300m (7,500ft) above sea level. Snow is common in the winter months above 1,500m (4,900ft). Below is teh climate data for Gangtok, which experiences a sub-tropical highland climate:

As you can tell from the list of states above, this is the largest climate area in India, making up a majority of central India, virtually all of eastern India, and parts of the north. The climate experiences dry winters and moderately wet summers (that get wetter the further east you travel). It's cold enough for the occasional frost in winter and hot in the summer. Below is the climate data for Lucknow, right in the centre of the climate area:

There are two "tropical wet" climates in India, though distinghishing between the two might seem like splitting hairs.

This climate is found on the southwest coast of India and on its islands. It is one of less common climates in the world. The weather is always at least warm, usually hot and always humid. The dry season lasts from December to April. It is extremely rainy during the wet season. The information below is for Thiruvananthapuram, the biggest city in Kerala:

This is the other major climate area of India, that occupies much of the country. It encircles the drier sub-tropical humid area mentioned above. The only difference between a tropical monsoon climate and a tropical savannah climate is that this climate has a drier dry season. Otherwise, the weather is pretty similar. The rainy season is June to September. The information below is for Kolkata, the third largest city in India.

India is home to some of the oldest cultural traditions on the planet and, as the second most populous country on the planet, it's incredibly diverse as well.

Languages of India in India

The following table shows the number of speakers for each of the 29 most common languages in India. Please note that the data is 14 years old, but should still generally reflect the percentages within the country:

In 2011 the following religions were identified in India:

For more information about the culture of India, ask us in the box at the bottom of this page.

Canadian citizens can apply for an e-visa online here.

In order to apply for an e-visa, you will need a scanner and a digital photo of yourself.

You can pay the fees using either MasterCard or Visa. Fees are currently US$60 but are set to increase for Canadians in the near future.

You must apply for your e-visa at least 4 days before arriving in India and you can only enter India with an e-visa at the following airports:

If you would like to see more information about the different Indian visas on this page, please let us know by completing the question box at the bottom of this page.