An Indonesia visa is necessary for Canadian citizens and permanent residents who want to travel to Indonesia. There are two kinds available; a business visa and a tourist visa. The tourist visa covers leisure visits to the country for people visiting friends and relations or who wish to holiday there. Tourist visas are limited to a fixed period of time and no business activity is allowed. The business visa covers both business and leisure visits enabling business people to participate in trade, business meetings and exhibitions in the country as well as taking a vacation. Business visas do not cover permanent employment. Your Indonesian visa must be obtained prior to leaving Canada.

Indonesia sits on and around the equator so it experiences a tropical monsoon climate and there is not much variation in temperature or weather between the 17,000+ islands that make up the country.  There are distinct wet and dry seasons and it is always hot. Here is the climate of Indonesia's largest city and capital, Jarkata, for reference:

Note that a few of the islands closer to Australia experience less rain.

Not surprising for a country made up of over 17,000 islands, Indonesians speak many languages. There are at least 45 languages spoken by 300,000 or more speakers in Indonesia. Below are the most common: 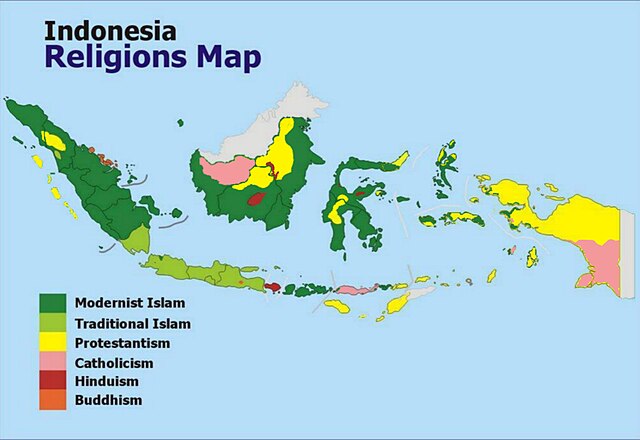 Most Indonesians are Muslims, but there is a great deal of variety. The below numbers are as of the last census, 2010:

There are over 300 different ethnic groups in Indonesia. Below are the 17 most common:

Canadian citizens do not need a visa to enter Indonesia for tourism purposes for up to 30 days. If you plan to stay longer or are going for business, you need a visa. If you a Permanent Resident of Canada from a country whose citizens require visas, you need a visa.

Let us know if you would like more information about Indonesian visas.

Embassy of the Islamic Republic of Indonesia