This article details where refugees are most likely to be in the world in early 2015. Unsurprisingly, most of these countries are located near or in the Middle East or in Africa, where much of the world’s worst conflicts have been in recent years. The charts below show refugees as percentages of total populations.

This article details where refugees are most likely to be in the world in early 2015. Unsurprisingly, most of these countries are located near or in the Middle East or in Africa, where much of the world’s worst conflicts have been in recent years. The charts below show refugees as percentages of total populations.

Liberia is just 24th in total refugee population but 11th in refugee ratio. 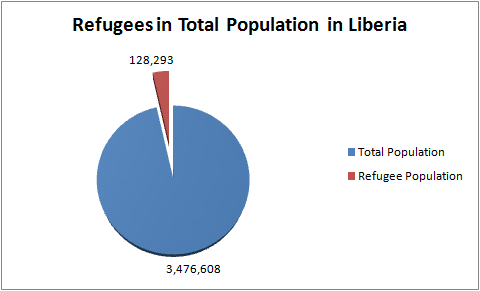 Montenegro has relatively few refugees – mostly from Kosovo and Serbia – but has the 8th most refugees as a percentage of the population. 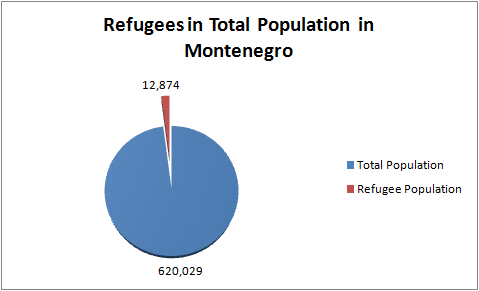 1 refugee for every 48 people

Djibouti has only the 51st most refugees in the world, but it is a small country with a tiny population. Djibouti is 6th in refugee ratio. Most of these refugees are from Somalia. 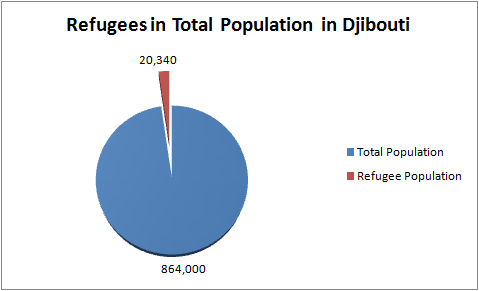 1 refugee for every 42 people 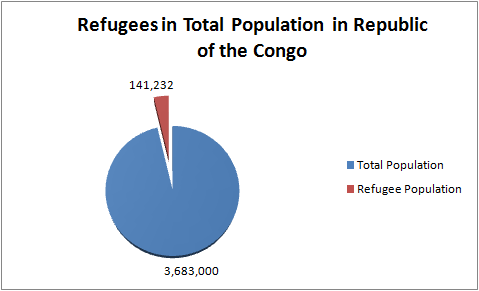 1 refugee for every 26 people

The most populous country in the world, also has the 10th most refugees in the world. However, because China is so big, this doesn’t make a dent in China’s overall population: 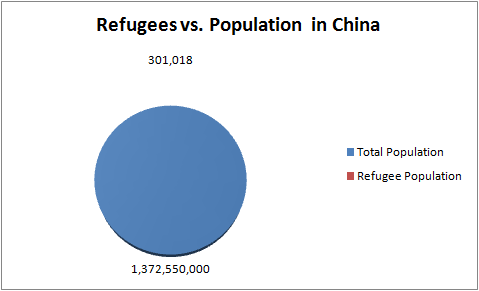 Chad has the second most refugees in Africa, at last check, due to the conflict in the Darfur region of Sudan, which makes up the entirety of Chad’s eastern border. 260,000+ of these refugees are from Sudan, the remaining refugees are primarily from Nigeria. 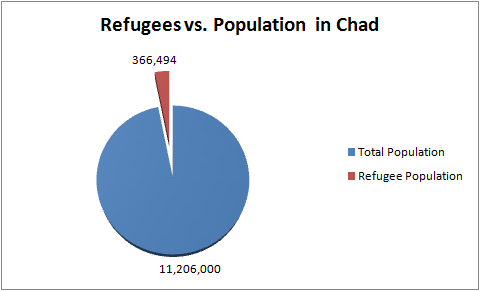 1 refugee for every 31 people

Chad is 5th worldwide in native to refugee ratio.

Lebanon has long been a place Palestinians sought refuge, in prior to the Civil War (which lasted until the country was invaded by Syria in 1990), but now that Syria has left, it is a refuge for Syrians fleeing the war there. 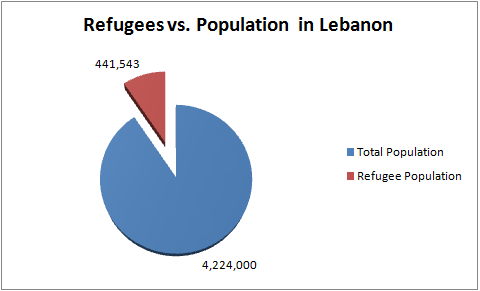 1 refugee for every 10 people

Over 10% of the population of Lebanon is currently made up of refugees. That’s the second highest ratio in the world, behind only Jordan.

The economic giant of Europe has long been a preferred destionation of refugees. It has the most refugees of any country entirely within Europe. 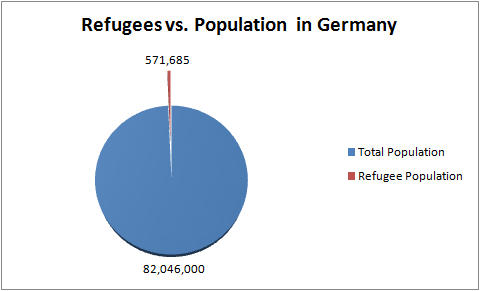 1 refugee for every 144 people

Kenya has the most refugees of any country in Africa, which should come as no surprise, given its proximity to Somalia. 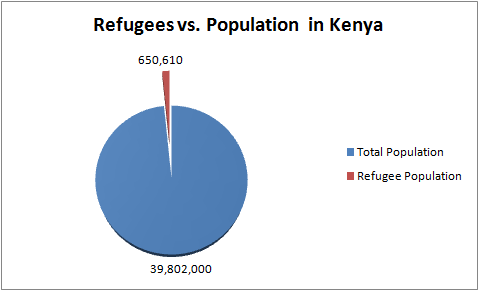 One camp in Kenya holds 350,000 Somalians alone, over half the total refugee population in the country.

There are nearly one million refugees in Iran in part because it sits directly between the two countries invaded by the US this century, Afghanistan and Iraq. The vast majority of these refugees have been from Afghanistan – 950,000 are from there. Only about 30-40,000 are from Iraq. 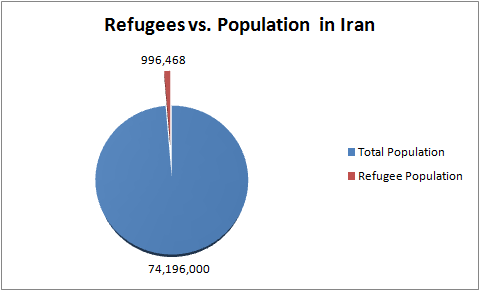 1 refugee for every 74 people

Despite having nearly a million refugees, Iran ranks only 13th in population to refugee ratio.

Given the issues in Syria right now, it’s shocking that there are so many refugees in Syria. But before the situation deteriorated, Syria was where many refugees fled from Iraq and, before that, from Lebanon and the West Bank. 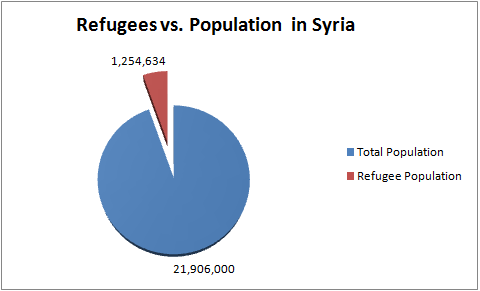 1 refugee for every 17 people

Given what is currently happening in Syria, this number probably isn’t correct (see below), but before the recent war, Syria was a place of refuge. Based on these numbers, Syria has the third highest refugee to native population ratio in the world, but that information is likely out of date.

Shockingly, Turkey has a lot of refugees right now. 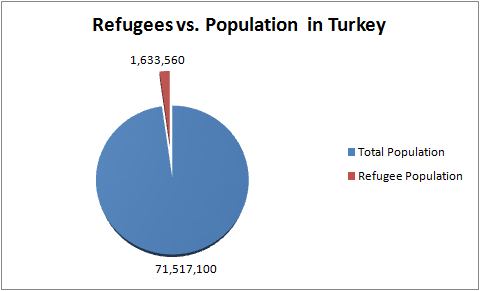 1 refugee for every 44 people

First, they came from Iraq. Now they come from Syria. And the Syrian refugee problem is significantly greater than the Iraqi/Kurdish one was. Turkey has the 7th highest native to refugee ratio in the world.

No country has been impacted by the crisis in Syria more than Jordan (besides Syria, obviously). And no country in the world has a higher percentage of refugees to their total population. 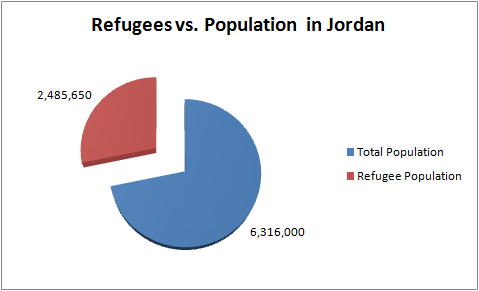 1 refugee for every 3 people

At last count, Jordan has one refugee for every 3 natives, three times the ratio of Lebanon’s 10-1 ratio.

Pakistan has the most refugees of anywhere in the world at last count, most of which have come from Afghanistan over the last decade plus. However, Pakistan has long been a destination Muslims from India, as well as Burmese who fled due to the persecution of Muslims in which has been a factor in that country for hundreds of years, but has peaked a few times recently, including in 1978 and 1991. 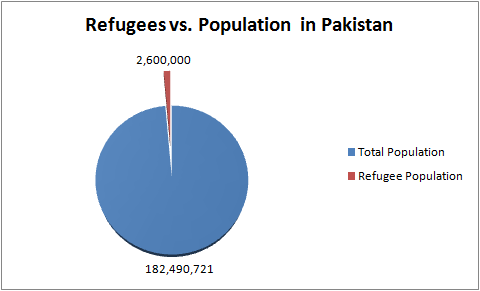 However, Pakistan is an extremely populous country, so refugees still make up just a fraction of the population; they are 9th worldwide in native population to refugee ratio.

All numbers from the United Nations – some are as recent as March 2015 and others are old as 2013. Refugees are constantly moving so these numbers are, by their very nature, imprecise.