If you’ve read one of our previous articles on smuggling drugs, wildlife, weapons, and just silly things that trigger border personnel , you might think you’ve seen it all. But this issue of shocking airport seizures is not for the faint of heart!

If you’ve read one of our previous articles on smuggling drugs, wildlife, weapons, and just silly things that trigger border personnel, you might think you’ve seen it all. But this issue of shocking airport seizures is not for the faint of heart!

A passenger at the Stansted Airport was found with a glass jar of 10 human eyeballs in his luggage. Needless to say the eyeballs were confiscated, but our imaginations are free to speculate on what their intended use was.

A German professor was stopped at Rome’s Fiumicino airport, after a scan of his luggage showed a human skull. The traveler thought he had bought a fake skull for educational purposes, since he paid 50 euros (~$75 CAD) for it at a marked stall. To his great surprise, he found out it was a real human skull, and was arrested for the illegal possession of human remains.

That’s not the first time someone had purchased real skulls and was left to face the consequences. Two American tourists were arrested at the Athens international airport, as the scanner detected 6 human skulls in their luggage. The tourists said they bought the skulls at a souvenir shop in Greece, and claimed that they thought they were fake. Nevertheless, the coroner confirmed that these were human remains, and the pair was charged with desecrating the dead.

Two women returning from their Cuban holiday were stopped for having a set of terracotta skulls. The security personnel at the Fort Lauderdale-Hollywood International Airport became suspicious of these objects, which were reportedly bought at a religious shop. Anthropologists confirmed that the skulls, thought to ward off evil spirits, were likely used in the Palo Mayombe religious rites. Palo Mayombe is a religion brought to Cuba from Congo during the slave trade, and its religious rites include worship of spirits with natural objects – feathers, shells, sticks, hair, and bones.

Upon further examination, it was found that each of the terracotta pots contained fragments of real human skulls. The remains even showed stains from soil contact, which means that it’s likely that those people were buried prior to being exhumed and used in ritual worship. The pots were decorated with shells, red soil, and black dog hair. The bones were wrapped in cotton, which tested positive for human blood.

As shocking as it sounds, there is no evidence of those rites ever killing or harming a person for their bones. They’re usually obtained by visiting a cemetery, sprinkling the ground with rum, and finding a ‘receptive spirit’ who ‘volunteers’ for the ceremony – once found, the remains are dug up and used in the ritual.

Thousands of pills containing the ground up, powdered flesh of human babies were found in several smuggling attempts. No, really. The pills are in high demand in South Korea, as they’re seen as a universal cure for all that ails you.

The ‘supply’ comes from China, where corrupt medical professionals are maximizing on China’s overpopulation and unwanted pregnancies. Stillborn, aborted, or deceased babies are reportedly sold, kept in household refrigerators, and dried in medical microwaves. More than 17 000 pills have been found and confiscated by border security; countless others have been smuggled into South Korea.

Upon further examination, the pills were found to contain 99.7% human flesh. Despite the belief in their medicinal benefits, in reality the human flesh capsules contain super-bacteria and other harmful ingredients that can be detrimental to the consumer’s health.

Alternative Chinese remedies are on the rise of popularity, although they present a serious problem. Everything about sourcing those ingredients is illegal and presents a real health risk for the consumer. Among countless others, some of those remedies contain human placentas and ground up rhino horns, not to mention human flesh.

The biggest worry of the authorities is that the pills will find their way onto the internet, and be sold to gullible, desperate people in need of actual medical intervention. The labeling is obviously misleading, with some of the ground up placenta being sold as circulation and blood flow aids, other capsules disguised as ‘stamina boosters.’ So be careful out there! Do not buy medical supplies from unlicensed websites. 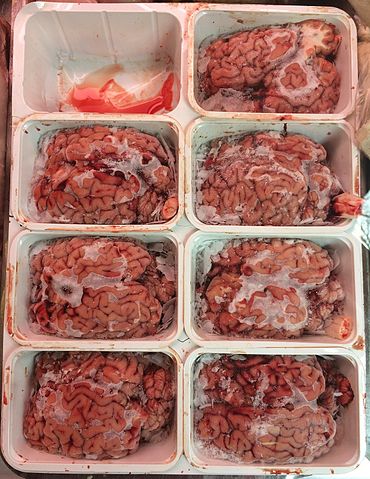 This one doesn’t seem nearly as bad, when preceded by ‘baby flesh pills’ – but it’s still a pretty weird seizure, considering it’s a fairly common one.

Three Sudanese travelers at the Cairo’s international airport were found carrying 420 pounds of cow brains. Reportedly, their intention was to sell them to Egyptian restaurants. On that particular week, this was the fourth time someone tried to smuggle cow brains from Sudan, as they’re dirt cheap in Sudan, but immediately gain 6 times more value within Egyptian borders.

Liver and brain restaurants are very popular in Egypt. The delicacies are often deep fried, and eaten with pita and spicy sauce. If you thought the worst of it is the actual eating of the brains, it’s in fact the unsanitary conditions in which they’re smuggled. We’ll leave this one up to your imagination. 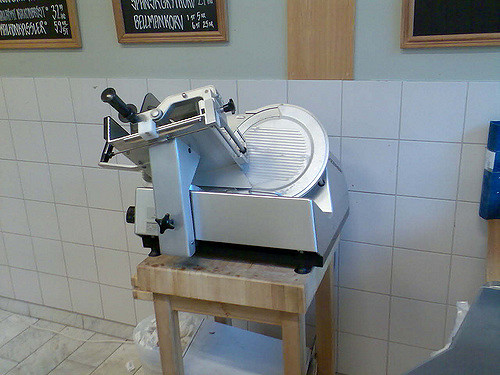 Before you yak all over your keyboard, we’ll change gears and bring you a little Public Service Announcement from the TSA (Transportation Security Administration). It’s a reminder that border personnel tend to get a little touchy about massive sharp objects, razors, and blades.

You’d think it should go without saying, but one passenger at the Southwest Florida International Airport was caught trying to take a massive meat slicer on board – in a carry-on bag. As ballsy as that is, it remains illegal by border security standards. So in case you have plans for vacationing somewhere with a lot of meat, but not a lot of slicing devices – resist the temptation to bring your own

Speaking of bulky things, a female traveler at the Denver Airport refused a full-body x-ray scan. When the security personnel conducted a pat-down, they were shocked to see an old-school Victorian metal chastity belt hugging the woman’s hips – padlock and all. Since she refused ‘access’ to the rest of her body for a pat-down, she was denied entry into the States, and held for further investigation.

Note: This snail cream does not contain cocaine.

Drug busts happen all the time, but the weird part is that these guys were concealing the drugs as ‘snail extract’ moisturizing face cream. Apparently snail-slime cream is supposed to rejuvenate skin, and is of growing popularity with the ageing population, and people go as far as actually let slimy snails climb all over their faces to get the healing effects. Here’s some more information, in case you’re interested.

If you’ve read our Silly Airport Seizures article, you know that border personnel have confiscated anything and everything remotely threatening, including bullet-shell Christmas lights, gun-shaped belt buckles, and even toy guns.

While it remains a common PSA from the Transportation Security Administration, it appears that not everyone got the memo on not bringing weaponry and gun-shaped objects through customs. A woman traveling through the Baltimore/Washington International Airport in Maryland was seen wearing stilettos literally shaped like small revolvers with a fence of bullets wrapped around. As if that wasn’t enough, she was also wearing bullet-link bracelets on her wrists. Needless to say, the firearm replicas were not allowed on board the plane, and the woman went on without them.