Shotgun shell Christmas lights. Batarangs. Grenades. And much, much more.

It may come as a big surprise to you, but airport personnel get super touchy, not just about weapons, but about items that look like weapons. If you’ve checked out our Top 10 Silly Border Seizures you know that border personnel have gone as far as to confiscate children’s toy guns just because they resemble weaponry.

This list covers top weaponry seizures at airports, and it has everything from batarangs and pen pistols, to prosthetic-leg guns and war thrones. But for now, we’ll start small: 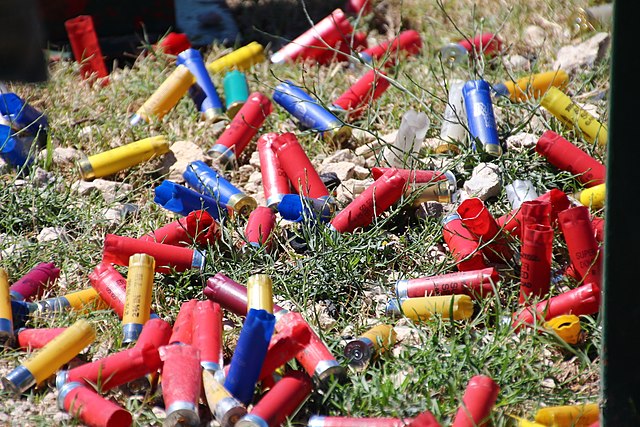 What a way to get in the Christmas spirit! Security at the Newark Liberty International Airport confiscated “Jingle Bells Shotgun Shells” – a Christmas tree decoration sure to liven up your party. Despite their holiday colors, TSA insists that all ammunition, regardless of functionality, is prohibited for transportation in carry-ons.

In case you’re wondering about other trinkets that may pose a threat to security, double-check your keychain – some things you may hang alongside your keys may be classified as ‘punching weapons.’ 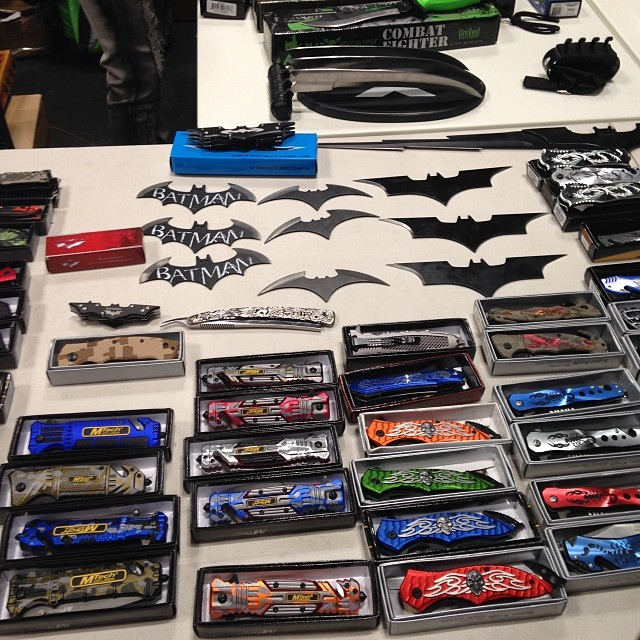 In case you’re not up-to-date on your weaponry terms, batarangs are Batman’s ninja stars. You’d think that not bringing pointy sharp things on a plane would be common sense, but the TSA blog is actually full of stories of batarang confiscations. So many, that we tried to count them, and couldn’t.

Just to reinforce the regulations, batarangs are classified as ‘bladed throwing weapons,’ which are not a big hit with airport security. For that same reason, throwing stars are also routinely confiscated.

At least the above were carried openly, but there are plenty of weapons that are intentionally concealed. But airports have seen a wide range of creativity re concealment, particularly with disguised knives.

Some of the more creative attempts include knives disguised as lipstick, keys, combs, pens, canes, and pendants. Another one was fixed to the underside of a tie. And a dagger was disguised as a cell-phone.

One knife was even disguised as a gun. Because what’s a better way to hide a weapon, than inside a more dangerous weapon? 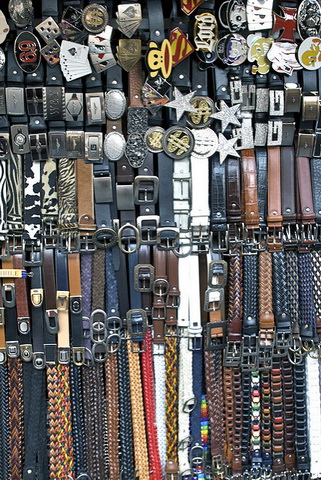 This one is so common, that it deserves its own entry. Here’s your typical, run-of-the-mill belt-buckle knife, these were designed to be super inconspicuous, and this one is even serrated.

This one even comes with a cool skull on it, just in case you thought that the accessory was not dangerous, and were about to not confiscate it at an airport.

Just so you know, even obviously fake belt-buckles in the shape of a gun are also not legal. Apparently the main reason for it is not just that it’s crime against fashion, but also the fact that the mere appearance of a gun may raise panic.

And as another warning, sparkly bling-gun belt-buckles at the end of bullet-belts are also not allowed.

I’m sure you know that smoking kills, but in this case, a pack of cigarettes can leave you incapacitated.

TSA is finding another trend of concealed electroshock weapons. Among the confiscated items were a lipstick taser, a stun-gun cellphone, and even a stun gun affixed to the end of a cane. 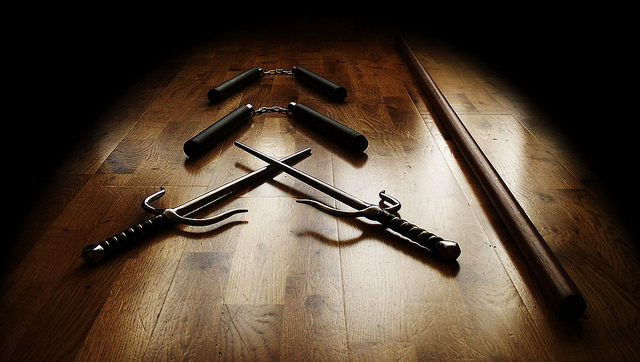 Security at the Reagan National Airport in Washington discovered a pair of 6 ½” throwing knives. Hilariously, they were hidden inside a hollowed-out book, right within Chapter 2: Ninja Equipment.

Turns out martial arts weapons are still weapons, and can be confiscated by border security. That rule applies not only to throwing knives, but also sais, nunchucks, and even super cool glass nunchucks.

Just when you thought people couldn’t get any cheekier with the things they try to sneak past security, the TSA blog will always find a way to surprise you. A small medieval wooden flail was confiscated from a passenger at the Midway (MDW) International Airport in Chicago. Flails, along with sledgehammers and mallets are considered bludgeons, and make security personnel fairly nervous.

Apparently other less spiky medieval weapons are also not allowed in carry-ons. Things like this giant mallet found in someone’s cabin bag at the Burlington International Airport (BTV). We thought we’d give you a fair warning, in case you ever travel with Thor.

Buckle in, the list is only about to get better. Security staff at the Orlando International Airport (MCO) found a futuristic action-movie style pen-gun, casually carried by a traveler who described it as “more of family heirloom than a weapon.”

Interestingly, this impressive .22 caliber pistol was not the first find of its kind. A few years earlier, a passenger at the Lehigh Valley International Airport (ABE) tried to sneak in one just like it. So it appears that there are at least a couple of them available out there, and in case you’ve been waiting for a sign, here it is – it’s time for you to start your James Bond training. 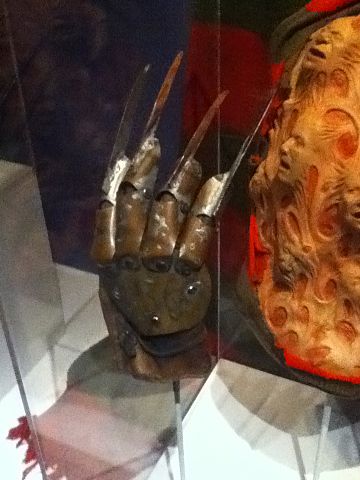 If James Bond is not your kind of guy, there are tons of other beloved characters to choose from.

Like Freddy Kreuger, or Wolverine. Although you might have to consider different accessories… perhaps something like the massive sharp claws discovered by customs officials in Coventry.

Loaded gun in a prosthetic leg:

In May 2013, the staff of the Salt Lake City Airport discovered a loaded Jennings .22 caliber pistol. You’ve already seen enough items on this list to know the extent of creativity TSA sees, but this particular gun, with a bullet in its chamber and a fully loaded seven-round clip, was strapped to a passenger’s prosthetic leg.

In all fairness, it’s pretty obvious that sneaking a loaded gun past airport security is silly… isn’t it? Well, it happens more than you’d think. In 2012, the Salt Lake City Airport confiscated 20 guns. And this particular gun was their 19th confiscation of 2013 – even though at the time, it was only May.

On a bigger scale, one TSA report even shows that in a 2-week period, they confiscated 75 firearms, 66 of which were loaded.

Speaking of obvious things to not pack in your carry-on, Little Rock’s Clinton National Airport security personnel found a powder horn with three ounces of black powder in a passenger’s carry-on bag.

If you’re not sure why that’s a threat, black powder is the earliest known chemical explosive and is the kind of thing that’s used to make fireworks pop way out there and shake the skies. It was generally used as propellant in firearms, and was put in guns below the bullets to help their release. It is explosive at high temperatures, and must be transported with caution (and not in a carry-on).

You might be surprised to find out that people still try to sneak (often massive) inert explosives past airport security. It is actually shockingly common, and TSA has confiscated a wide array of them: from various grenades and land mines to C4 demolition explosives, they’ve really seen it all.

Some other inert explosives found by border security include an old artillery round, a military bazooka round, and a mortar round.

They’ve even confiscated a cannon barrel, a cannon ball, and a flare gun – all on separate occasions.

For the record, those kinds of items are not allowed in checked baggage either. Not even replicas, such as these confiscated German WWII stick grenades.

Oh come on, you didn’t think we’d end this list on some frilly flare gun, did you? We’ve been saving the best for last.

Customs agents at the Philadelphia International Airport seized an immensely unusual item – a War Throne. Adam Solow, a great lover of art, had the misfortune of naively importing a sculpture he purchased. More specifically, a literal throne made of land mines, bazookas, grenades, and other firearms.

While customs confiscate kids’ fart-guns and gun-shaped belt buckles, Adam was casually trying to bring in an African throne decorated with bullets along the sides.

The throne was a piece of politically-charged artwork by a famous Mozambican sculptor Goncalo Mabunda and, for roughly $8000, you can have one in your living room, too! In addition to all the above, Mabunda’s other works also feature AK47s, rocket launchers, pistols, and other objects of destruction. They’re even made into anthropomorphic compositions and given ‘faces.’

Unfortunately for Solow, he was not allowed to bring the throne into the US. The Bureau of Alcohol, Tobacco and Firearms withheld the artwork until he gets a firearms importation permit, and even then, it would have to be dismantled to make sure none of the weapons are in working condition.

As cool as those things might be, we would strongly encourage you not to bring any weapons or replicas on your flights. The worst thing is that even inert or imitated items look exactly the same as their live counterparts, and the airport security is often required to close down checkpoints, evacuate whole terminals, and secure the perimeters until explosives detection professionals can approve the items as inert. So follow your crazy uncle’s example, and keep your explosives safely buried in your backyard.