We need electricity for just about everything today, from heating our homes to powering our appliances and keeping our lights on. However, without access to the right information, you can easily find yourself paying an overpriced electric bill at the end of each month. To understand why electricity prices vary in each province or territory, how is electricity in Canada generated and how can you switch to a competitive supplier, we prepared this guide.

We need electricity for just about everything today, from heating our homes to powering our appliances and keeping our lights on. However, without access to the right information, you can easily find yourself paying an overpriced electric bill at the end of each month. To understand why electricity prices vary in each province or territory, how is electricity in Canada generated and how can you switch to a competitive supplier, we prepared the below guide.

Electricity Rates by Province or Territory

The average residential price of electricity in Canada is $0.174 per kWh, similar to the average electricity rates in the U.S. and considered very affordable by global standards. However, there are a couple of things to be aware of, when it comes to paying for electricity.

Let’s look at the average electricity rates in Canada and how they vary from province to province and territory.

The second thing to note about the electricity rates is that they are based on the amount of electricity that you consume each month. In other words, the price you pay for kWh of electricity will be different if you on average you use 1000 kWh or 2000 kWh for your monthly needs. This is an important concept to understand when shopping for competitive electricity rates in the energy deregulated provinces.

Why Do Electricity Rates Differ Throughout Canada?

The Canadian Constitution places the control of the electricity lifecycle in the hands of individual provinces and territories, causing the electricity rates that residents of each province or territory pay to vary.

Before electricity can reach your home, it first must be generated, transmitted from the generating side to a low-voltage substation, and finally carried via the distribution power lines all the way to your home.

The conditions for each of these stages will vary in each province or territory and the final price will be influenced by several cost factors, such as the infrastructure age and maintenance costs, the distance the electricity has to travel and the availability of energy sources.

Electricity Deregulation by Province or Territory

In Canada, the federal government leaves it to the individual provinces and territories to regulate the electricity market. With the Electric Utilities Act of 1995, Alberta became the first and only Canadian province to deregulate retail electricity. This has created an energy marketplace giving the end customers the option to choose an electricity supplier, based on the competitive price.

Because searching for the perfect rate is time-consuming and requires a lot of research, Alberta residents can consult Energyrates.ca, an independent Canadian energy comparison site. To use the rate comparison tool, you can simply enter your postal code to view the available rates in your region.

Though not fully deregulated, Ontario is another province that aims to improve the electricity products available to the residents, including the fixed 12-month price period plan, based on consumer usage patterns. Since 2012, it also introduced government-backed Feed-in-Tariffs, effectively giving customers the option to be paid for the excess electricity they generate at home, but don’t use.

How Is Electricity Generated?

Canada has access to abundant natural resources, which is reflected in its energy generation mix. Nearly sixty percent of all electricity generated comes from hydroelectricity and further seven percent from other renewable resources. The hydro infrastructure spreads from coast to coast and it is the reason why Canada’s electricity systems are often labelled one of the cleanest in the world. 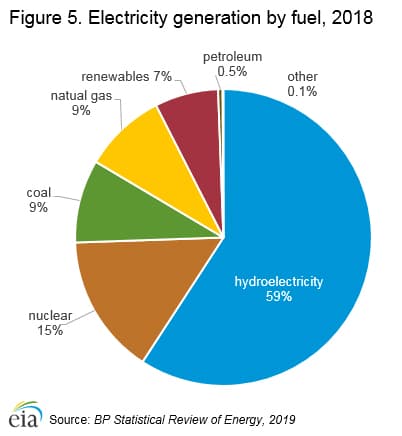 As a result, electric suppliers in Canada have strong incentives to offer green energy as part of their product portfolios. Canadian residents keen to green up have a few options available to them: They can switch to a green energy plan, install their own solar panels or purchase Renewable Energy Certificates (RECs). These are essentially tradable certificates, or proof that a certain amount of energy has been generated from renewable sources (1 REC = 1MWh of generated green energy).

Ever wondered which one is the greenest province? According to the Green Provinces Report Card, created by a company called Corporate Knights, it’s British Columbia. The report scored individual provinces and territories on various criteria, including the energy miss, carbon footprint and waste. Well done, British Columbia!