As of December 18, 2018, driving under the influence of alcohol and/or drugs (DUI) is now a serious crime in Canada. That means that permanent residents or temporary residents (international students in Canada on study permits, or persons in Canada on temporary work permits, or even tourists on visitor visas) could become inadmissible and therefore could potentially face the loss of their status and deportation from Canada.

As of December 18, 2018, driving under the influence of alcohol and/or drugs (DUI) is now a serious crime in Canada. That means that permanent residents or temporary residents (international students in Canada on study permits, or persons in Canada on temporary work permits, or even tourists on visitor visas) could become inadmissible and therefore could potentially face the loss of their status and deportation from Canada.

Because DUI offences will now be punishable by sentences of up to 10 years rather than up to 5 years, DUI offences are a serious crime and fall under those listed in the IRPA section just above. And that means that permanent residents, as well as temporary residents, could become inadmissible as a result of DUI charges.

But not only that, paragraphs (b) and (c) mean that even if you commit and/or get convicted of DUI outside of Canada – say on a trip back to your home country or any other country on a holiday, for example – then you also face inadmissibility which could mean denial of entry or possible deportation.

Why did this happen?

Bill C-46 was enacted in the summer of June 2018 as a means to update both cannabis and alcohol limits for driving in light of the legalization of cannabis for recreational use in Canada. While some provisions of the bill have aroused controversy – especially random roadside testing which has drawn criticism from the Senate – it is now the law of the land. That means that driving while drunk or under the influence of cannabis (as defined by the bill) is a serious crime.

But the other part of the equation is the IRPA (Immigration and Refugee Protection Act) itself, which rules that a permanent resident becomes inadmissible and thus faces risk of deportation if they commit a serious crime, unlike Canadian citizens of course. This rule in the IRPA that we quoted above has been in place well before Bill C-46, so what we have here is a case of the unintended consequences of legislation.

What can I do?

There are several things you can do if you’re a permanent resident of Canada, especially if you don’t have any DUI charges against you.

Apply for Canadian Citizenship as soon as you are eligible

In general, you must have spent 1095 days physically present in Canada, within the 5 years leading up to your application for citizenship. Time spent as a temporary resident may be used to calculate your total time spent in Canada, but each day as a temporary resident only counts for half a day of physical presence in Canada when applying for citizenship. Once you’re a Canadian citizen, the DUI law is still clearly a concern – who wants to do something stupid and spend years in jail? – but you will no longer face the threat of deportation.

Apply for criminal rehabilitation if the offense was committed outside of Canada or seek a record of suspension from the Parole Board of Canada if the DUI charges occurred in Canada.

To be eligible for rehabilitation (the DUI offence was committed outside of Canada) you must:

To seek a record of suspension in the case of where the DUI charges occurred in Canada, you must request a Record Suspension Application Guide from:

For a serious crime like DUI, you have to wait 10 years after completing your prison sentence before you can apply for a record of suspension. That essentially puts your plans to live and work in Canada on hold for a decade, and it may mean you will never be admissible to Canada again, depending on the specifics of your DUI charges.

Don’t consume alcohol and/or cannabis and drive, wherever you happen to be 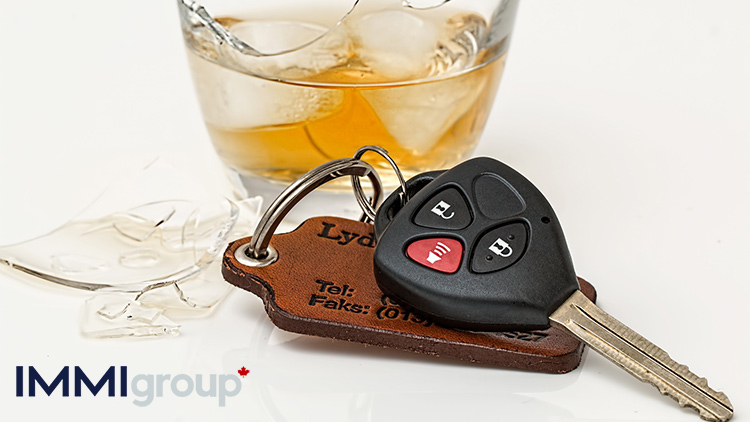 Operating heavy machinery like forklifts, tugboats, commercial aircraft, tractor-trailers, jackhammers, or a skill saw while under the influence is never a good idea either. Be smart and drive stone-cold sober. Especially if you’re a permanent resident of Canada. But this new classification applies to any and all residents of Canada, whether citizens or not.

Bill C-46 has made life a little trickier for permanent residents and temporary residents of Canada. In the coming months we will keep you updated on any possible changes to C-46 and how it might impact criminal inadmissibility in Canada.