Just about everyday an angry Canadian posts a comment on our YouTube channel blaming immigrants for increased crime. So we wondered, is there any truth to this?

HOW ARE CRIME & IMMIGRATION LINKED IN CANADA

That same year along B.C.’s Highway 16, in the central part of the province, 15 young women had been murdered or had gone missing since the early 1970s, and that stretch of the highway is now called the Highway of Tears. The murders and disappearances started in 1970, when immigration to Canada came in at 147,200 and the nation’s population stood at around 20 million.

These are two very different stories: one about newcomers to Canada seeking to start a new life in their adopted home; the other about a series of grisly killings that remain mostly unsolved and have caused fear and anger in local communities affected by the tragedy. No one would suggest that the B.C. killings are somehow linked to immigration, but at the same time people do worry about rising levels of immigration and crime rates in general in Canada.

First, let’s look at immigration levels into Canada over the time period in question. 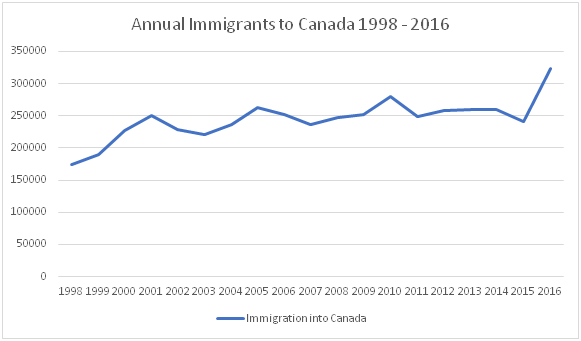 We can see an initial uptick in the late 1990s followed by a plateauing of immigration levels in the first decade of the 21st century, with a final noticeable uptick in 2015 and 2016, in part as a result of reforms to Canada’s immigration policy by the newly elected Liberal government. So, while immigration levels have increased steadily, on average, it’s been a modest rise overall, despite two periods of noticeable increases in the immigration rate. However, it’s important to remember that Canada’s total population has also been increasing. Let’s look at the numbers for total population over the period in question next. 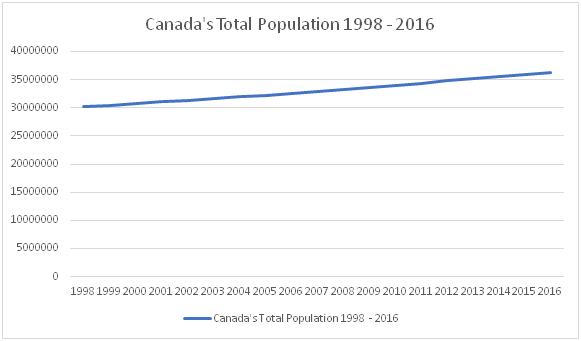 Returning to the period in question – the years 1998 to 2016 – we can now attempt to see what the relationship is between a modestly rising rate of immigration and crime rates in Canada over the years in focus. A typical crime rate measures the number of incidents reported to police over a given time period, usually a year. However, a misdemeanour charge is not the same as an armed robbery or an assault with a deadly weapon. To reflect the seriousness of crimes and to give them a weighting in a crime rate index, we now have what is called the Crime Severity Index, or CSI.

The CSI measures the severity of any crime along with the frequency with which the crime was reported to police over the year in question. That means armed robbery or assault with a deadly weapon will get a far heavier weighting than shoplifting, for example, in the CSI. This helps smooth out changes in the overall crime rate due to changes in relatively minor offenses and focuses on changes in the frequency of major crimes which tend to be better reflected in the CSI. While the Crime Severity Index has only been in place over the last decade or so, statisticians can construct a CSI level for previous years by analyzing police reports and the severity of crimes along with how often they occurred. Let’s look at the CSI over the period in question.

What we clearly can observe is that the Crime Severity Index (and the Violent Crime Severity Index which does not include minor non-violent crimes) have clearly been on a downward trend for most of the period in question. When taken in conjunction with immigration rates into Canada, it seems clear that an increasing number of immigrants to Canada actually results in – or, rather, coincides with – a falling crime rate. The perception that immigrants cause a disproportionate share of crime is hard to square with the data. It may be that some in Canada tend to blame whatever culture or ethnicity a criminal happens to belong to when he or she is an immigrant, while they blame the individual who commits a crime when he or she is a born and bred Canadian.

Moreover, if we look at major urban centers in Canada, only Vancouver was noticeably above the national CSI average of 71. Cities like Montreal and Toronto with large immigrant populations had some of the lowest Crime Severity Index rates in Canada. Vancouver’s drug problem might be one cause of this difference. But overall, it appears that increased levels of immigration have coincided with a safer and more law-abiding country which is something all Canadians should appreciate.