So you’re fed up with American greed and racism and violence and imperialism? Or with high taxes and surveillance and illegal immigrants? From the scariest right to the reddest left (and at most stops in between), Americans are waking up to the fact that their time atop the pyramid is coming to an end. Need proof that it’s time to disembark the good ship USA? Here are ten, sorted and tailored so that they can be more easily shouted from each side of the political canyon. If you’re conservative, start at the top. If you’re liberal, move on down.

First, I look to the right.

Rising unemployment. House foreclosures. Decline of American finance. Death of American manufacturing. University graduates on food stamps. Rush Limbaugh becoming president of the ACLU. (This last thing isn’t true, but at this point it wouldn’t shock us). Try India, China, or Brazil. Avoid Europe, as if you needed to be told that. We also suggest getting an engineering degree. 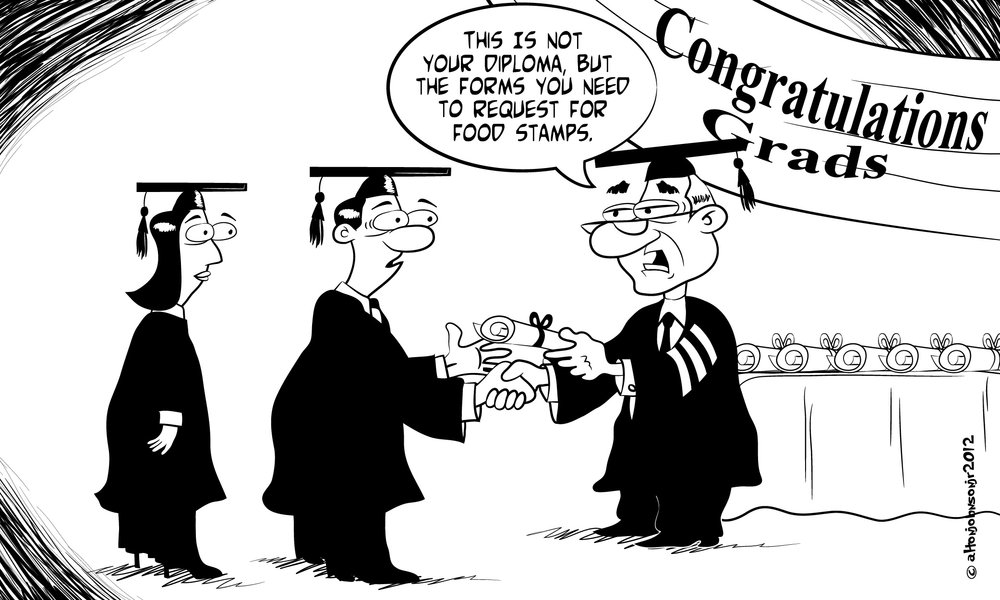 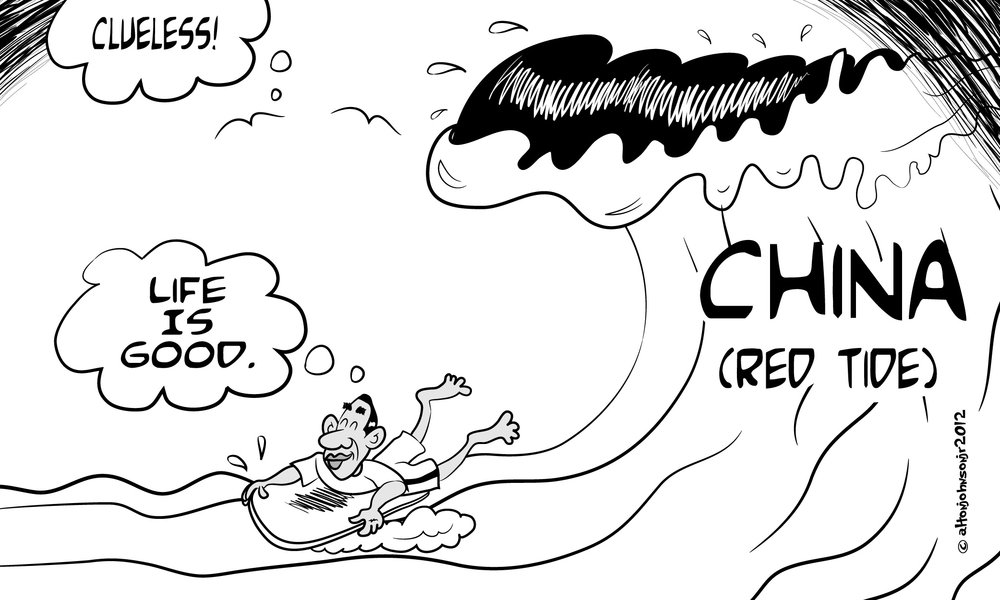 Not enough guns. Cold dead hands. Americans are in grave danger of leaving themselves vulnerable to an invasion from China. Those liberals on the west coast aren’t going to do anything to stem the red tide! Try an isolated island, where, if all goes well, you’ll do such a thorough job of self-governance that you’ll eventually take up arms in rebellion against the harsh restrictions you’ve imposed on yourself.

Obamacare rankles the freedom-hungry. If you’re too lazy to find work with a company humane enough to offer health benefits, you deserve the suffering. After all, to quote Ayn Rand, “Evil requires the sanction of the victim.” Don’t let that abscessed tooth make you a slave to government coddle-care! Grab some pliers and actualize yourself!

Maybe you’re sensing a pattern now. Obama’s a socialist! He wants to tax the job creators! He’s going to turn America into Greece! The taxes are too damn high. You can certainly find countries with lower taxes nearby. How about the Cayman Islands, for instance, one of the world’s most notorious tax havens? Legend has it that when Christopher Columbus first spotted the Caymans in 1503, he noted in his diary “I have discovered a land where one day, perpetrators of investment fraud will be able to ‘çool their jets’.” 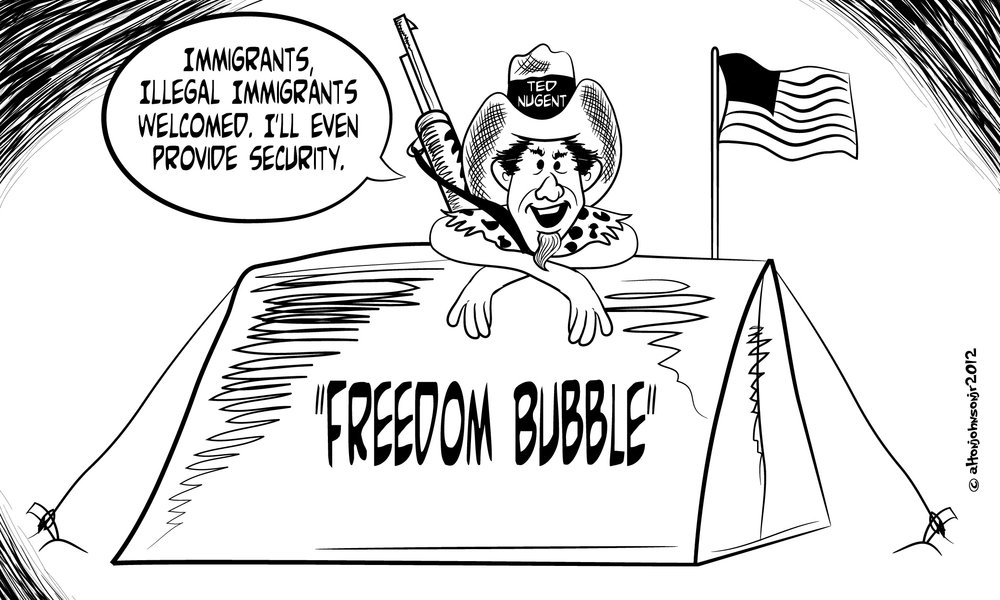 Too many immigrants, especially too many illegal immigrants. Build a border fence. Or start planning an escape to more homogenous enclave. Or wall yourself off from foreign elements forever with the new “Freedom Bubble”, a polyurethane tent available at Wal-Mart for only $89.99, from the Ted Nugent Collection. 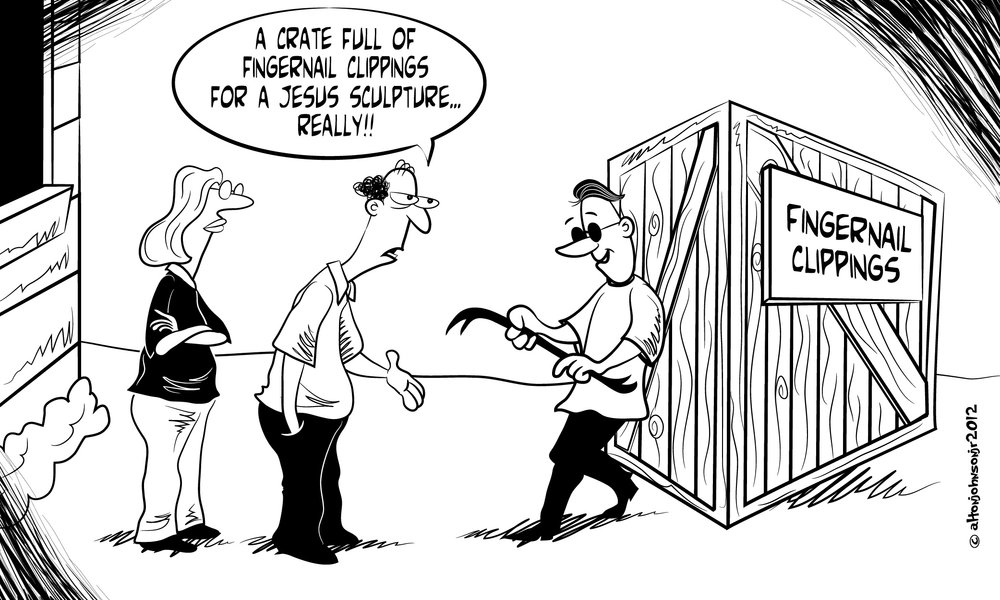 Why are they making a sculpture of our lord Jesus out of finger-nail clippings? Why aren’t there more real artists like Thomas Kincaid, who depict America the way it really is? Constantly glowing as if on the verge of explosion.

How can I live peaceably among baby murderers? Not to mention baby armed robbers or baby con artists? There are plenty of countries with much, much stricter approaches to family planning.

Bomb Iran. American troops are the bravest and most honorable men and women who have ever worn uniforms, outside of the good people at Papa John’s Pizza. It might be hard to find a country untouched by the American military, but you can certainly find a few with even bigger boners for tanks (I’m looking at your boner, North Korea, and it bears a remarkable resemblance to a SCUD missile).

There is a massive gay and possibly Jewish conspiracy to dismantle most or maybe even all of the powerful and profitable Megachurches. What these heathens fail to realize is that the Lord requires greed and decadence as promotional tools to spread his good name. To quote Joshua 8:17, “He serveth my name most gloriously who owneth a summer home in Southampton”

Don’t tread on me!

Now I look to the left.

Rising unemployment. House foreclosures. Decline of American finance. Death of American manufacturing. University graduates on food stamps. Joan Baez becoming president of Bank of America. (This last thing isn’t true, but at this point it wouldn’t shock us.) As tempting as it is, avoid Europe. I also suggest getting an engineering degree. 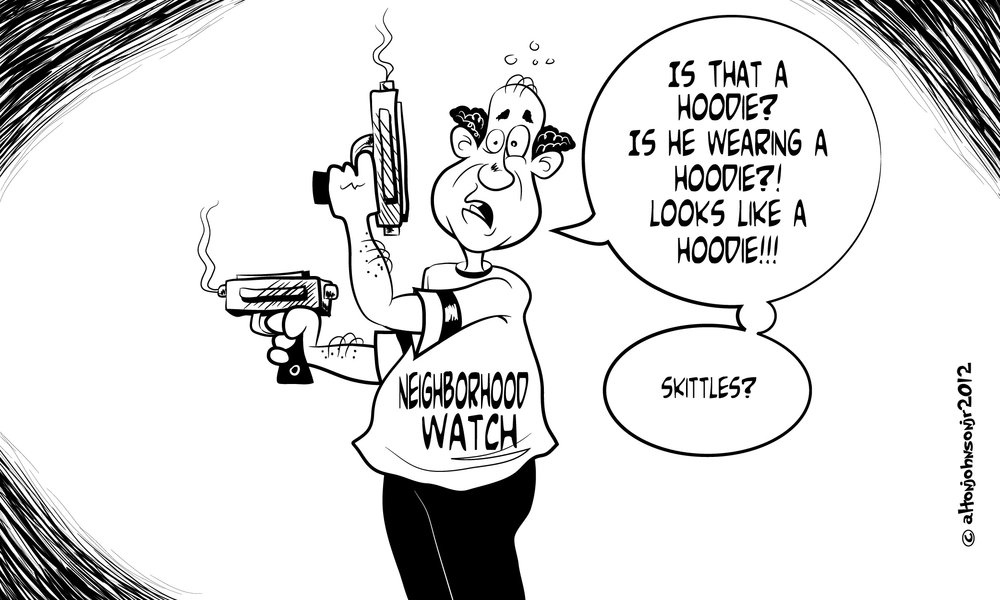 Too many guns.  Insane shooting tragedies happen in America all-too-regularly, and many people think that tougher gun control laws could help. The gun lobby is very, very powerful, however, and their camouflage tuxedo jackets allow them to blend in perfectly as Washington lobbyists. Get out now and shake your head at news from your former homeland when more lunatics start shooting unarmed black teenagers on quiet streets in Florida. 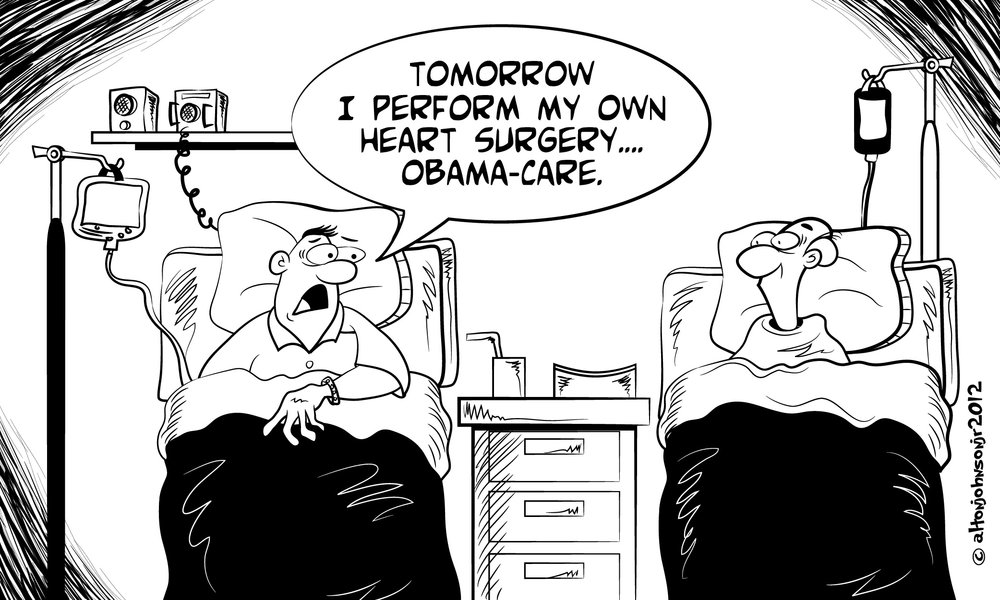 Amazingly, a modest extension of existing American healthcare benefits and regulations caused outrage a few years ago. “Obamacare” barely added any coverage and merely gestured at restricting insurance industry greed, but it still rankles the freedom-hungry, who prefer the more direct and brazen Wall Street toadying of their own party. The flip side of this, of course, is that the poor or under-employed lack comprehensive healthcare. If you can’t believe how the world’s richest nation could let its poor die from tooth infections, get out of there! 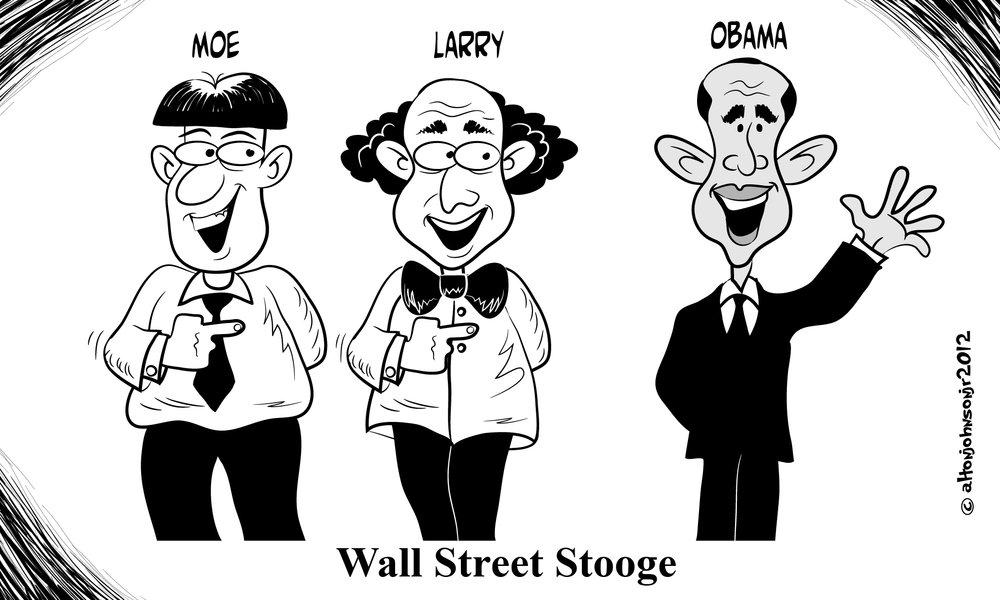 Obama’s a Wall Street stooge, merely pandering to the Occupy Wall Street crowd by calling for higher taxes on the richest Americans. Corporate taxes aren’t high enough and the loopholes need to be closed. You can certainly find countries with higher taxes, including one just north of you (hi!). Keep in mind that you can always pitch our government new taxes, including an “upscale dog toy tax” and a “permission to use the park bathroom tax”.

Border fence? How about a fence around the unenlightened South to keep the rednecks away from the big, rich, ethnically-diverse cities on the coast? Those Southerners and their open, venomous racism. At least racists on the coasts have the decency to pretend that their racism is ironic! 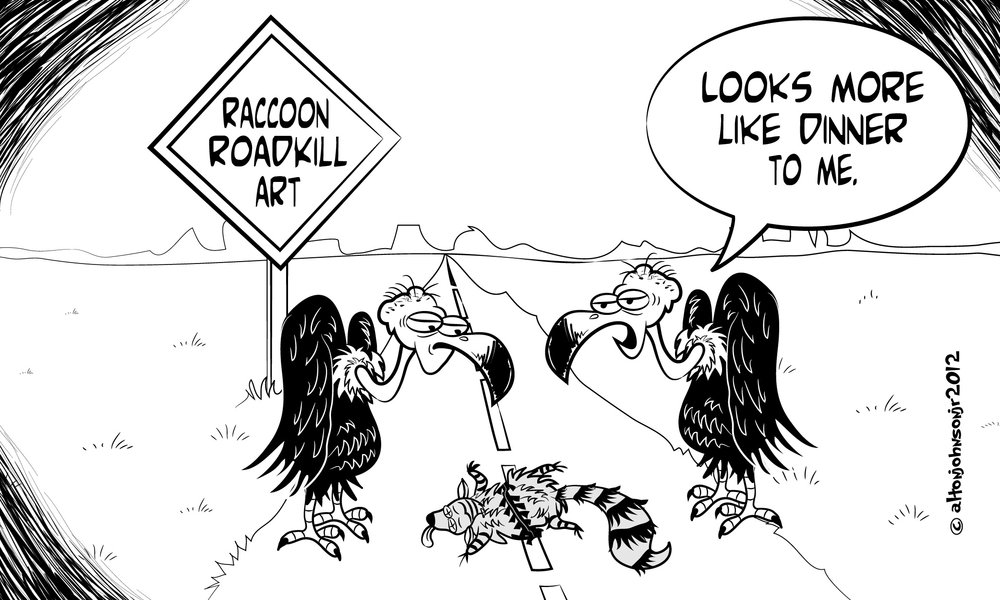 Why are these uptight wing nut philistines coming between me and my freedom of expression, MAAAAAAAAAAAAAAAAN?! My found-art piece “Raccoon Roadkill” is an honest depiction of the fact that I don’t have any ideas! Get me out of here! 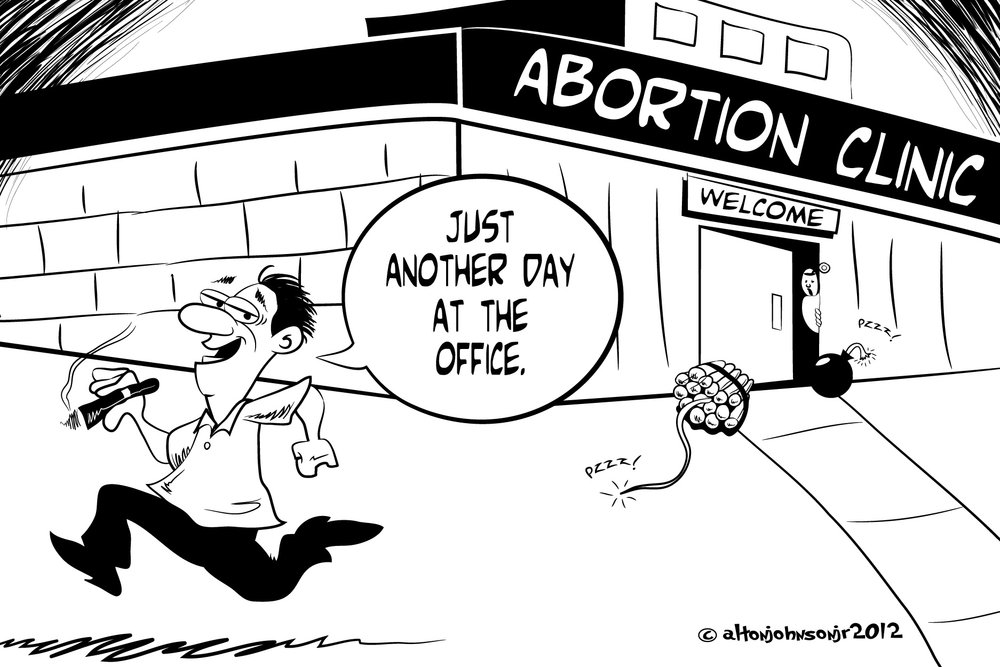 How can I live peaceably among doctor murderers? There are plenty of countries with far, far more open approaches to family planning.

US out of Iraq, Afghanistan, Libya, Korea, Guam, etc, etc, etc. There are so many American troops scattered across the world that you might occasionally wonder who’s left in America to write nasty things in YouTube comment sections. It might be hard to find a country untouched by the American military, but you can certainly find a few with even bigger boners for tanks (I’m looking at your boner, North Korea, and it bears a remarkable resemblance to a SCUD missile). Try those peace-loving Swiss and Swedes for sympathy.

There is a dangerous and deluded faction keeping America in the dark ages, working with their pals in the Israel lobby to keep America Judeo-Christian and conservative. Their fuel is “Waltons” reruns, strawberry oatmeal, and the music of Amy Grant. Maybe France’s militant secularism is more your speed.

Alright, I know I’m hardly the first one to point out how the political extremes end up meeting each other eventually, like a snake eating its own tail or like the world’s least appetizing donut. Neither the gun-toting rural Michigan militiaman nor the Bushwick-dwelling Wikileaks sleeper cell want the government’s filthy paws on their stuff, and neither want their movement or speech restricted or monitored in any way. Both sides want their own version of the lawless Old West, even if the far left would rather have that saloon replaced with a fair-trade co-op. Liberty is a big deal to Americans. They enshrine that stuff all over the place, from statues to flags to bizarrely jingoistic poker blogs. Don’t tread on me. No one will tread on you any more, American rebels. Be free! Somewhere else.