There are just some places and locations which would be too dangerous even for the likes of Indian Jones, largely because of the medical risks associated with these places. What are these places, what’s at issue there, why should you avoid them, and what precautions must you take if you, for whatever reason, are compelled to visit these places anyway?

If you grew up in the last few decades, chances are you grew up with, or quickly became familiar with, the adventures of one Indiana Jones.  Whether he was scouring the sands of Egypt for the Ark of the Covenant, flying from Shanghai to India to take on evil (and politically-incorrect) cults, or battling the Nazis across Europe and the Middle East for the Holy Grail whilst buddying around with his dad (Sean Connery, who else?), Indiana Jones stood for danger and adventure in exotic locales then, and he still stands for that today—

Even if those adventures are a filled with a little more CGI and physics-defying logic. (Surviving a nuclear test in a fridge that goes flying?  Really?)

That being said, there are just some places and locations which would be too dangerous even for the likes of the world’s most famous whip-cracking treasure hunter, largely because of the medical risks associated with these places.

What are these places, what’s at issue there, why should you avoid them, and what precautions must you take if you, for whatever reason, are compelled to visit these places anyway?

Haiti has so many factors working against it it’s hard to know where to begin, as every reason for Haiti’s placement on this list is absolutely heartbreaking.  To begin with, the story of Haiti, as with much of the Caribbean and Americas, is one largely influenced by colonialism and slavery, which was not only obviously morally repugnant, but continues to have long and far-reaching social and economic impacts on the region to this very day.  As if that weren’t cruel enough, Haiti was ruled for decades by dictators, and remains an area subject to military coups and general unrest.  Add to that the fact that, despite sharing an island with the Dominican Republic—which, while still contending with its own problems, has done far better for itself—and the fact that it’s geography relative to its neighbor means that moisture necessary for crops tends to fall more on that side of the island, leaving Haiti itself often drought-stricken, and the tsunami which devastated much of the country, and you have the perfect recipe for a perpetually-impoverished nation with severe sanitation issues.

All of this goes a long way towards explaining why malaria and other related water-borne diseases continue to infest the region.  Disasters and dictators lead to poor infrastructure, that problem is only exacerbated by man-made disasters such as war and natural calamities such as the aforementioned tsunami, and all of that combines to create unsanitary conditions where water cannot be properly treated and cleansed, allowing malaria to breed in the hot, humid climate, and then spread, as with a drought, water is already scare, and so it’s hard to be picky about choosing what to drink.

There are pills you can—and, in fact, must—take before leaving for Haiti that can treat the malaria, and bringing your own supply of bottled water can naturally help cut down the risk of consuming something contaminated, but on the whole, Haiti’s naturally beauty is stricken by tragedy and disease, and so is, for now, sadly best avoided.

This region makes the list for reasons which are both recent and obvious.

The outbreak of the Ebola virus is today what the H1N1, SARS, and the Avian Flu were in previous years and, to a certain extent, still are to today.  Ebola has led to death after death in the region, and citizens of the US, Canada, and other Western and Eastern nations have been given warnings about traveling to such a climate.

Of course, it’s not just Ebola.  Malaria is a major problem in parts of Western Africa, for many of the same reasons as it plagues Haiti.  Dysentery and other diseases are ripe throughout the area, again, not without cause.  The region is rife with mosquitoes, and all the problems related to drought and sanitation present in Haiti are present here as well.  Add to that the fact that even something so simple as a mosquito net is absent from some hotels and outdoor areas, and you can quickly see how one little mosquito bite can turn your trip to West Africa into an absolute nightmare. 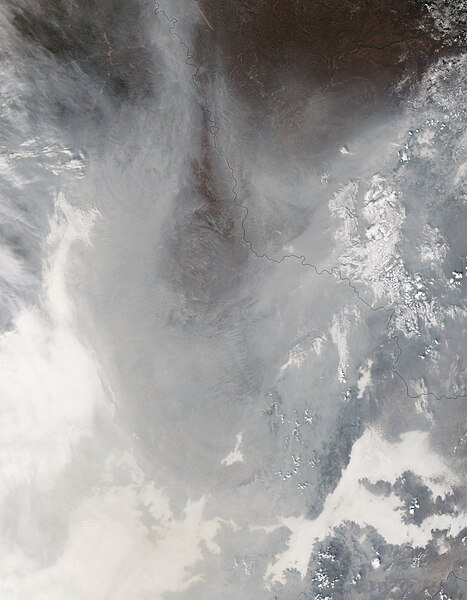 China may not, at first glance, seem all too obvious to have on this list, but some of the more industrial areas are definitely hazardous to your health.  A lifelong native of Los Angeles County, I can tell you that smog’s definitely an ever-present issue here—but we have nothing on industrial China.  There, smog levels can reach so high as to actually become actively hazardous.

Have you seen any of the pictures featuring smoggy-green Shanghai, or Chinese citizens walking around with surgical masks on their faces?  That would be the reason.  Keep in mind that Chinese cities can be massive, with the population of Shanghai itself topping 24 million total residents.  To put that into perspective, if it were its own country, Shanghai would be the 51st most populous nation on Earth—more populous than Australia, Taiwan, Syria or Israel.  Pack that many people into a city—even an exceptionally-large city—and you can bet that you’re going to have some problems with air pollution.

That being said, with nearly 1/5th of the world’s total population, a rich culture, and a standing as one of the true economic titans in the world, it’s entirely possible that you still might be finding yourself travelling to China, for business, pleasure, or both.  If you’re planning on traveling to the industrial areas of China, you’re going to want to take some precautions.  To begin with, you’re going to want to bring or purchase some of those aforementioned surgical masks, particularly if you’re headed for one of the smoggier areas.  There are websites online that track the overall air quality in Shanghai and other major cities on a day to day basis, and you’re definitely going to want to check those out and plan both your trips and excursions outside accordingly.  Finally, if at any time you feel any itchiness, irritation, or burning sensation on your skin or in your eyes, you should go get out of the air as fast as possible and seek further medical assistance as needed.

Get a Visa to China

The reason these regions are dangerous for medical reasons are pretty obvious.  Infectious diseases?  Not so much of a danger here.  Improvised explosives and rocket-fire?  Far more problematic.

It’s tempting to think “medical reasons” only means diseases and the like, but it’s worth remembering that war zones such as these areas can be hazardous to your health as well.  What’s more, war-torn areas and humanitarian crises tend to go hand and hand.  In the absence of proper hospitals or sanitation, and with entire neighborhoods or towns bombed to bits, it’s extremely easy for germs and medical maladies to spread quickly—just one more reason Ukraine and Syria are two vacation destinations best avoided for now.

The Danakil and Sahara Deserts

Vast deserts are just generally inhospitable, and these two in Africa are doozies.  The temperatures there regularly top 100 degrees Fahrenheit, and it is, of course, extremely dry there.  Whereas Western Africa has issues with mosquitoes and the spread of malaria, this region is just simply arid and, sadly, not entirely free from the ravages of war, either.