Here are some of the best areas in Canada for Catholics looking for a smooth transition.

Top Cities for Catholics in Canada

Catholicism is the largest denomination of Christianity, and you’ll be hard-pressed to find a corner of the world it hasn’t touched in one way or another.  However you might feel about religion, the Vatican, Catholicism or anything entailed therein, the fact of the matter remains that everything from art and literature to music and our very day-to-day vocabulary and “the historical sense,” as T.S. Eliot was so fond of saying.  Indeed, while Eliot—who stands as perhaps the greatest English-language poet of the last century—was born in St. Louis and became a naturalized British citizen and member of the Anglican church whilst living in London, Catholic-inspired imagery appears repeatedly throughout Eliot’s poetry.

Even so, however, the Anglosphere is one of the wealthier regions in the world, with the US, Canada, and UK alone all standing out as popular immigration destinations, the result of this being an influx of a variety of different groups and people into these regions, including Catholics.  Anyone who’s read or seen Brideshead Revisted knows what we’re talking about (and anyone who hasn’t—get thee to Barnes and Noble immediately.)

Canada is a nation rapidly rising in popularity amongst those looking to immigrate to or within the West. It’s the peaceful, popular home to national healthcare, maple syrup, and the Maple Leafs (as well as real hockey teams).

Here, then are some of the best areas in Canada for Catholics looking for a smooth transition.

Montreal is arguably the most famous Francophone city outside France herself, and she remains one of the bastions of Catholic culture in the world today, especially in largely-Protestant Canada.  It’s the largest city in Canada after Toronto, the 9th largest overall in North America, and arguably the most prominently Catholic city in North America.  Whereas most other regions in Canada can trace their heritage back to the British, Quebec was settled by the French.  This makes Quebec an incredibly distinct location both within and outside of Canada, and has contributed to the immense Catholic influence over both Montreal’s past and present.  Many of the province’s immigrants today come from Italy and France, both heavily Catholic.  The city is also home to some of the most prominent Catholic sites and cathedrals in North America, including the Notre-Dame Basilica (dedicated in 1829, a key Catholic site in North America, with its architecture based on Gothic Revival styles and its stained glass windows depicting scenes from Montreal’s colorful history) Saint Joseph’s Oratory (completed in 1967, it’s the largest church in all of Canada) and the Cathédrale Marie-Reine-du-Monde (consecrated in 1894, its crucifix mounted above the baptismal font is one of the most important site for Catholics in Canada.)  These three sites stand as the three largest churches in Quebec, and three huge reasons to consider giving Montreal a try as a Catholic immigrating to Canada. 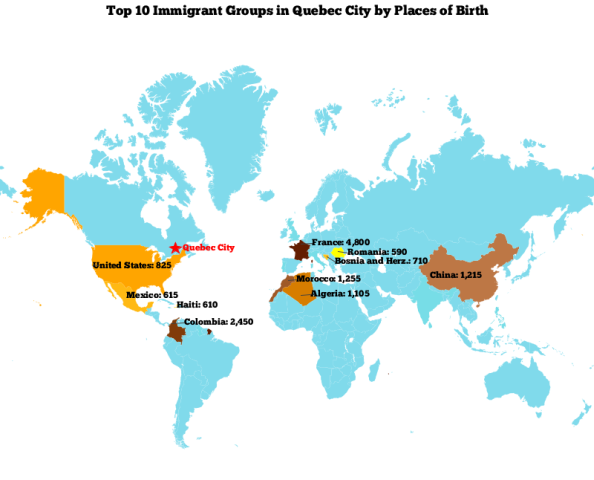 With the 2001 census reporting more than 90% of the city as Roman Catholic, Quebec City is as strong a contender as any to challenge Montreal for the crown of Most Catholic City in Canada, and potentially North America.  With more than 90% of those same respondents reporting French as their first language, it should come as no surprise that the city is a huge destination for French nationals looking to emigrate, so if that’s you, then Quebec City is about as magnifique une maison loin de la maison as you’re likely to find outside France itself.  Add to that the fact that other immigrating minorities tend to be or otherwise assimilate into Catholicism, and you have the perfect recipe for a great Catholic landing place.

It is home to one of the older churches in Canada, Notre-Dame-des-Victoires Church, built and founded over a long period, from 1687 to 1723, consecrated in 1723, with the interior reconstructed in 1816 after a bombardment from the British in 1759 during the Seven Years’ War.  An even older church and potentially even more storied church is the Cathedral-Basilica of Notre-Dame de Québec, which is not only the primary and most influential Catholic church in Canada, but is likewise the seat of the Roman Catholic Archdiocese of Canada.  The oldest parish church north of Mexico in the whole of North America, it was founded in 1647 and elevated to the status of a basilica in 1874.  A UNESCO World Heritage Site, it’s definitely worth a visit—and maybe more, if you’re a Catholic immigrating to Canada. 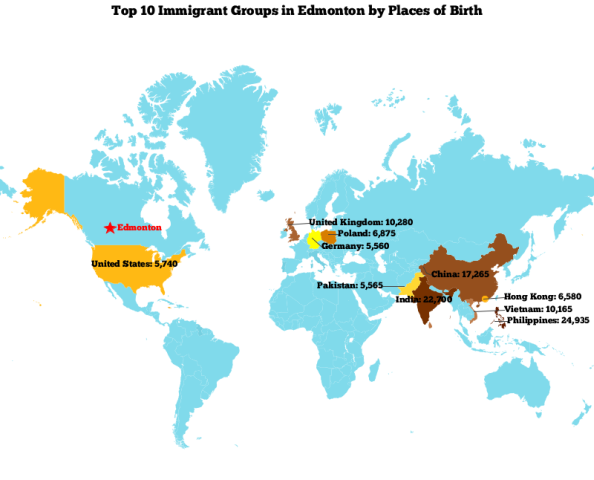 The province of Canada reported a more than 8% spike in the number of Catholics living there in 2011 as compared to its 2001 figures, making Calgary, Edmonton, and the region as a whole an increasingly-significant alternative to the dynamic duo of Montreal and Quebec City for Catholics looking to immigrate to Canada.  Granted, barring an absolutely seismic cultural shift, nowhere in Canada is ever going to wrest Quebec’s dominance away in terms of pure numbers and influence. 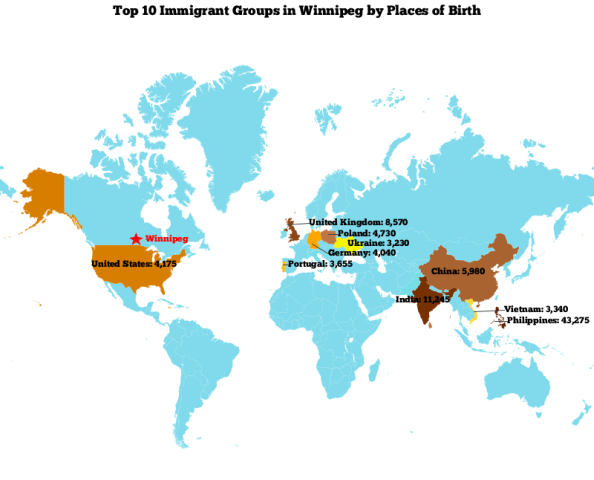 To say Ukraine has had a tough last year would be an understatement.  The former Soviet territory has been experiencing some extreme tension both within its own borders and with neighboring Russia as the latter annexes Crimea (in a totally-legitimate election) and has been accused multiple times by multiple sources of sending everything from troops to heavy weaponry across the border to aid pro-Russian rebels in an attempt by the Eastern half of the country to break away from the more pro-European West, all while everything from Anti-Semitism to urban warfare rage throughout the embattled nation.

The upshot of all this being that Ukraine—like most nations facing a protracted and bloody civil war—is likewise facing the possibility of an exodus, and that’s where Manitoba’s crown jewel Winnipeg comes in.  As luck would have it, Winnipeg is home to one of the biggest Ukrainian communities in Canada.  What’s more, it’s home to a special niche—Ukrainian Catholics.  Ukraine, as with many Eastern European nations, has been heavily influenced by the Russian Orthodox Church and other forms of Eastern Orthodox Christianity, which hasn’t altogether been all that “compatible” with Roman Catholicism to say the least (just ask Dostoevsky’s Prince Myshkin).  With Ukraine quickly becoming a hotbed for persecution, members of the nation’s Catholic minority may well be looking for a place to immigrate, and that’s where Winnipeg comes in.  Home to the storied Ukrainian Catholic Archeparchy of Winnipeg, Manitoba’s biggest city could be just the place for Ukrainian Catholics looking to escape the destruction in Donetsk.