The second step is to think about wealth and how wealth is created. Whether it’s a fairly stable “pie” that has to be divided up between Canada’s workers, or whether it’s a dynamic set of statistics that are constantly changing, and hopefully growing each year, with the obvious exception of recessions when the economy shrinks over a period of several quarters.

So, let’s start by examining the effect that immigration has on the Canadian economy.

What impact does immigration have on Canada’s economy? 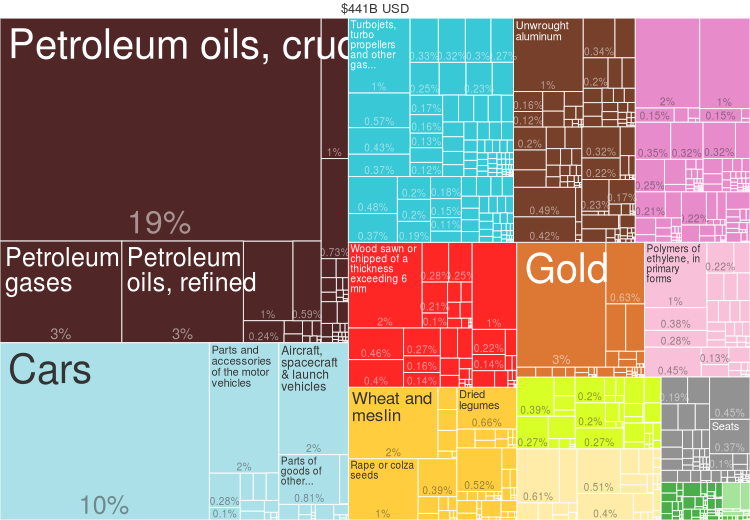 Canadian exports as of 2014 by The Atlas of Economic Complexity / Wikimedia Commons / CC BY-SA 3.0

Very little in fact, is the basic answer. The OECD’s 2018 Report on Canada’s economy states that:

While most studies of the effect on real GDP per capita in Canada conclude that immigration has a small negative effect owing to immigrants having lower earnings on average than the native-born, these studies do not take into account the effects of second-generation Canadians, who, as noted above, have higher levels of education attainment and earnings than other Canadians. Taking these effects into account, the overall impact of immigration on GDP per capita is likely to be positive.

In other words, many immigrants to Canada nowadays are filling in the gap that our slow birth rate produces in the needed supply of younger workers, especially with respect their children who are either born in or mostly raised in Canada. This helps to balance working Canadians against retired Canadians, in order to pay for the retiring Baby Boomer cohort which is starting to put an enormous strain on Canada’s retirement programs – like OAS and the CPP – and also on the country’s healthcare system. What Canada is managing to do is attract higher skilled immigrants with sufficient language skills, work experience, and education through its Express Entry program rather than have to deal with an enormous wave of low-skilled workers that are causing serious problems in several countries in Western Europe, like Germany, Austria, and Sweden.

That’s a crock to put it politely. Here are a few reasons why.

Where Are the Babies?

Canada has a slowing birth rate, especially among native-born families. The rate is noticeably lower than in the U.S. and is similar to Western European countries which are facing a demographic crisis. Canada needs immigrants in order to merely maintain its population levels, never mind grow its population at a sustainable rate. No immigration or low levels of immigration would mean less workers earning less money overall and a slower rate of GDP growth in Canada.

By changing to a points-based immigration system with the introduction of Express Entry in 2015, a system that has been and is being successfully used in Australia and New Zealand, Canada accomplishes several things: 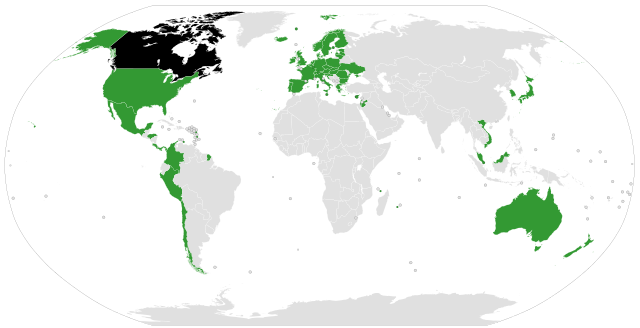 Attracting more skilled workers helps to strengthen our ties with trading partners around the globe. Canada is what they call a “Small Open Economy.” We. Need. Trading. Partners. It’s that simple.

While skilled immigrants often have to undergo a period of adaptation to their new home, their earnings in fact do rise over time and in the middle to high income earning groups they end up being greater than the earnings of native-born Canadians. Consider the following graph: 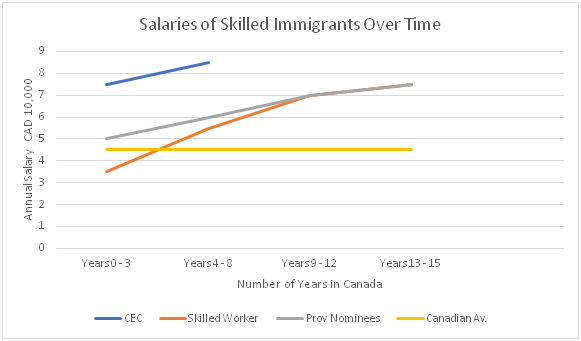 One can see how immigrants in the Economic Class tend to earn more than their Canadian-born counterparts after having lived and worked in Canada for a few years.

Higher Wages Are Good in For the Economy

Immigrants in the middle to upper income groups accumulate higher net-worths over their working lives compared to native-born Canadians. These immigrants can thus add to the pool of savings that our banking system then loans out to entrepreneurs who start businesses that employ people that earn money and buy houses and cars and laptops and hockey skates and donuts and coffee and even beavertails. (What’s a beavertail? It’s a delicious pastry which is now franchised in places like Japan, South Korea, and the UAE and comes from a recipe of the Romanian grandmother of entrepreneur Grant Hooker who started the business with his wife Pamela in the Ottawa area in the late ’70s.)

According to Statistics Canada’s study – Business Ownership and Employment in Immigrant-Owned Firms in Canada – immigrants have a higher rate of entrepreneurship than native-born Canadians, once they’ve lived in Canada for around 4 to 7 years. As the study says:

In the first few years after entry to Canada, immigrants understandably have relatively low rates of business ownership and job creation compared with the Canadian-born population. But these outcomes change quickly with years spent in Canada, so that after four to seven years, the propensity of immigrants to own a private incorporated business or to be unincorporated self-employed surpasses that of the Canadian-born population.

Yes, as the study also says, immigrant-based businesses tend to be smaller and employ less people than those founded by native-born Canadians, but the level of individual effort and commitment by new Canadians to pay their way contributes to Canada’s prosperity.

Is the Immigrant Wage Handicap Worsening?

There’s another concern that’s been voiced on more than one occasion and it has to do with the effect of an increase in a cohort of immigration – immigrants who land in Canada over a defined period, like 1976 – 1980 – on wages. Specifically, does an increase in immigration produce falling wages in Canada?

The answer depends on whose wages we’re talking about. Here’s a table summarizing the studies that have been done on this issue:

There’re a few takeaways from this chart:

Now let’s see what the numbers look like for immigrants’ earnings in Canada over their working lives in their adopted country. The indications are disappointing in a key area: the discount that immigrant workers take on their entry-level wages compared to native-born Canadian workers. Consider these numbers:

Why did immigrant entry-level earnings decline by so much relative to Canadian-born workers?

The main factor seems to be language ability (English and/or French), which was significantly worse with the cohort of immigrants in the early 2000s compared to those from the late ‘70s. Yes, your ability to communicate fluently in either English or French (or both) is one of the main factors, all else being equal, in determining the level of your wages. As we have seen, soft skills are vital in today’s economy, especially in an innovation-based economy where your ability to listen and communicate is what separates you from your co-workers.

Here’s a chart from the OECD study detailing how long it takes someone to raise their Canadian Language Benchmark rating by a single point (for example, from a 6.5 to a 7.5):

Let’s assume you can spend 8 hours a week taking English classes. That’s a high number, given the fact that you are assumed to be someone with a full-time permanent job. But even with 8 hours a week, the above chart shows that you need about a year of constant studying and classes to improve your English or French language skills. This is especially true for your reading skills, which are likely to take about 18 months to upgrade. And in today’s innovation-based economy not being up to speed with regards to your reading ability will be a real hindrance to your wage growth. We keep reminding our readers how important it is to upgrade your language skills. This OECD study – which is based on data from IRCC – is living proof of that. And remember, language skills are necessary but not sufficient. They are a way to ensure that you will get paid less of a discount compared to your native-born peers in your area of expertise. You will need your hard (or technical) skills as well, which most Economic Class immigrants possess at fairly high levels.

Finally, there is the notion that somehow immigrant workers are stealing jobs from native-born Canadians. Given that Canada has one of the world’s most stable economies and has experienced generally good growth rates over the past several decades as immigration levels have been maintained or increased, this idea does not seem to be supported by the evidence. Especially seeing that Canada has a very rigorous immigration system that places emphasis on skills rather than on refugees or on family reunification, compared to some other developed countries. Consider the following chart: 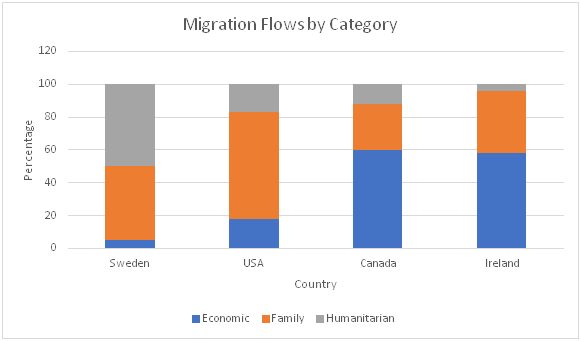 As can clearly be seen, countries like Canada and Ireland (as well Australia, New Zealand, and the UK) focus much more on the Economic Class of migrants in order to attract quality skilled labour to the country in order to provide the foundation for future growth.

And that’s the point. The economy is not a fixed pie that has to be squabbled over in what is called a zero-sum game. Immigrants do not necessarily have to lose in order for native-born Canadians to win. Think of the economy as one heck of a big croissant that’s continually expanding in the crucible of innovation and diversity that is Canada. And as any French-speaker will tell you, croissant means growing.

How to Get a Job Offer From a Canadian Employer