A humourous take on how to pass through Cuban customs, including how to complete the form.

Let me share a secret with you – Cubans talk a lot. They love conversation and emphatic declarations, especially in any sort of argument. And their jargon is full of hilarious linguistic expressions. Castro himself, in his prime, would sit in front of a microphone and broadcast to his captive – if there ever was cruelty in an expression, this is it – audience as well as those around the Caribbean, for hours at a time. Without a bathroom break. So Cubans don’t mind spending quite a few syllables to say something that could be communicated in a few terse words, like Chileans tend to do. Is it any wonder then, that when you arrive at customs in the Republic of Cuba, that you have quite the form to fill out? The beaches of the socialist paradise await you but first – as in any socialist paradise – you have a little paperwork to take care of.

The Aduana General de la Republica – AGR or customs – start off fine asking you for your name, nationality, point of departure, info about family members etc. All standard stuff. But it gets interesting real quick, as they say in Florida. You have to declare any amount of cash greater than US $5,000 which is half the limit in most countries. Of course US $5,000 goes a long way in Cuba. But then the fun stuff starts.

If you brought in:

then please place an X beside the appropriate category.

If you want to set up a counter insurgency in the Sierra Maestra at the southern tip of the island under the guise of a trekking expedition with Belgians and Swedes, why just put an X next to Satellite equipment, as well as Weapons and ammunition.

If you feel young Cubans missed out on the rave scene and you have come to help, then put that X right next to Drugs, narcotics and psychotropic substances. If they had sub-categories, I’m guessing ecstasy would go under psychotropic. Of course, you have to be careful about not treading on the wrong toes. Cuba as a transit point for South American narcotics is a long held suspicion. You wouldn’t want the undersecretary of youth culture, for example, to find out you’re trying to muscle in on his drug turf. 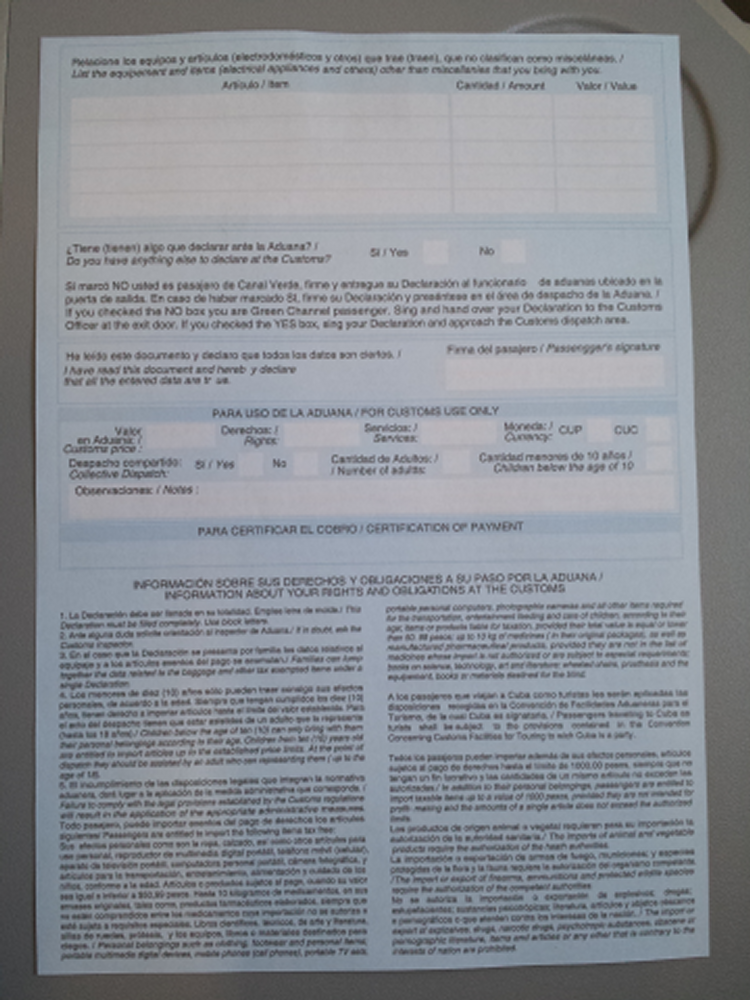 Then you have to declare the worth of any household items like soap or toiletries etc. that you might be bringing in. Just in case you want to set up a little stall in your hotel room and sell Johnson’s baby shampoo to the staff.

Next list any electrical appliances you might be bringing in: stoves, fridges, microwaves, Widescreen HD sets, etc. One has to assume this item is directed at Cuban exiles returning for a visit and sharing the bounties of evil capitalism with their kin back home on the island. Future Shop really needs to set up a duty free outlet at Pearson International. Just saying.

You might want to gargle a little in the bathroom before your flight touches down. Once you have itemized you customs form, you then decide if you have anything more to declare to customs. If no, you are a Green Channel passenger and you must sing, yes it says sing, and hand over your declaration – let’s assume they mean the customs form and not a rigorous defense of your ideology within a Marxist framework – and if you do have something to declare, you must also sing your declaration, and then approach the Customs Dispatch area. The question arises then, if you can really nail, for example, Justin Bieber’s “Never Say Never”, do you get to bring in radar jamming systems? Or if you are an innocent retired insurance salesman with nothing to declare who botches “Send in the Clowns”, do you have pay a fine? Or would that be a tariff?

You would think once the singing is over that would be it. What more is there left to say after you’ve croaked out a version of “Locked in the Trunk of a Car” by the Tragically Hip? But no, it’s not over yet, you have the fine print to read under the Rights and Obligations of passengers. If you have kids, what they can bring in depends on how old they are. You see Cuba has categories of items that kids of each age group can possess. If you’re under 10 then certain things can be in your possession and other items can’t be. If you’re between 10 and 18, a different set of items are permissible as personal possessions. Again, this must be to curtail exiles bringing in all sorts of goodies for family members.

And finally, if the AGR likes your singing and does not dislike the information in your customs forms, you will get your tourist visa card that is valid for 90 days and can be renewed for another 90, but only for recreational purposes. That would mean that serious illness, for example, or armed insurgency, is not a valid reason for a 90 day extension. And finally, it’s good to know that your visa card can be filled in by typewriter, just in case you have your Smith Corona portable typewriter handy in your carry-on bag. But remember, no mistakes are allowed if typing is the way you go. And best to take voice lessons before boarding your flight.

Bring your Cuban spouse to Canada

Bringing Your Filipino Spouse to Canada

Can I Bring My Boyfriend/Girlfriend to Canada?

Bringing your American Partner to Canada

How to Prove Single Status for Marriage Abroad

Bring Your Mexican Spouse to Canada in 2 Steps

Bringing Your Jamaican Spouse to Canada

Bringing Your Vietnamese Spouse or Partner to Canada

Proving You Are Single in the Balkans

Is the Canada-Cuba Love Affair Over?

Canada vs. Philippines: How to Make a Filipino Resume Canadian

Top 4 Ways to Keep in Contact With Your Cuban Spouse

Is Gay Marriage Now Sort of Legal in Cuba?