In recent weeks, we’ve had evidence that there has been a change in the way in which those who are attempting to claim or achieve Canadian citizenship are notified as to the success or failure of their test or interview with a citizenship judge.

In recent weeks, we’ve had evidence that there has been a change in the way in which those who are attempting to achieve Canadian citizenship are notified as to the success or failure of their test or interview with a citizenship judge.

This comes as no real surprise: the history of the incumbent government’s utter determination to radically overhaul Canada’s citizenship policy is a storied one. Dating back to the conflict between Israel and Lebanon in 2006 Prime Minister Harper, who had only recently been elected, found himself having to deal with the evacuation of somewhere around 11,000 Lebanese-born Canadians, some of whom had never actually lived in Canada, and some of whom allegedly returned to Lebanon within mere months of being evacuated. There was a media furore, with the term ‘Canadians of Convenience’ being coined, and the government was determined to address the issue.

Don’t want to get rejected? Take a practice test

The New Method of Notification 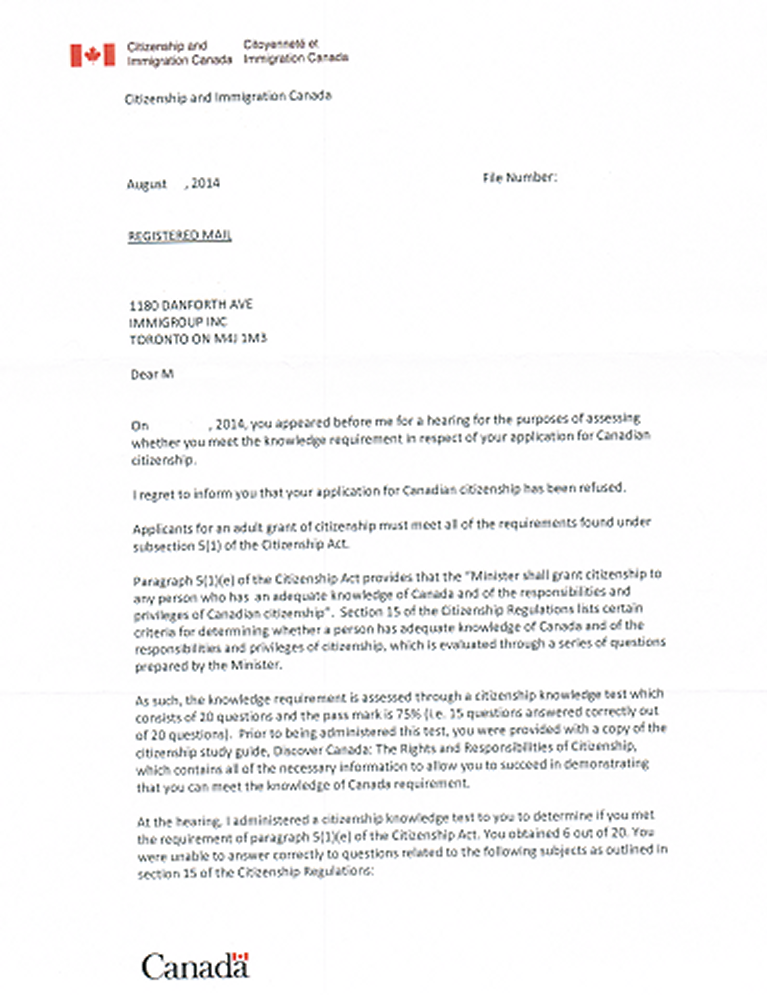 A new three-page letter is now being sent out to those who are unfortunately denied citizenship for having failed the citizenship test. This letter sets out the reasons why the applicant has had their citizenship request denied, pointing to the relevant legislation known as subsection 5(1) of the Citizenship Act. 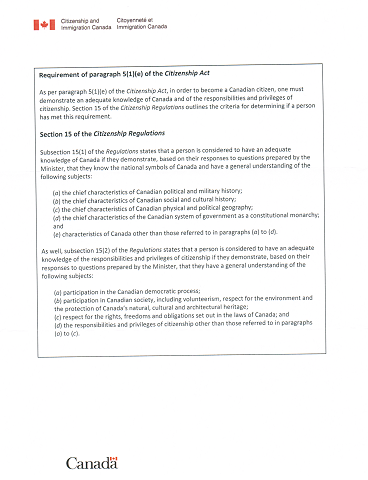 This paragraph of the rather lengthy act sets out the various stipulations which factor into whether or not a citizenship request can be deemed legitimate or otherwise. It provides that the “Minister shall grant citizenship to any person who has an adequate knowledge of Canada and of the responsibilities and privileges of Canadian citizenship”. This ‘adequate knowledge’ is assessed through a written exam known as the ‘citizenship knowledge test’ which consists of 20 questions pertaining to Canada and its people. The pass mark is 75%, so in order to receive citizenship, one needs to score 15 out of 20 or above. 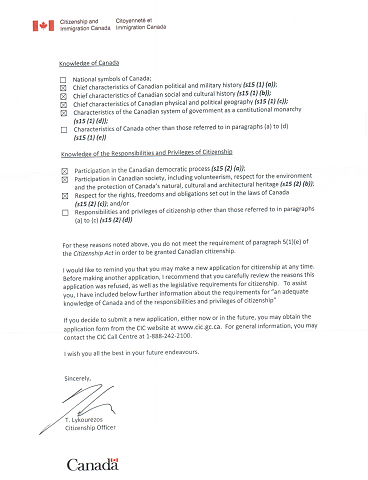 As you can see, this list is as vague as it is exhaustive, and whilst the study guide proves helpful, there is certainly a great deal of ambiguity inherent within the notion of ‘knowledge of Canada’.

The second knowledge requirement category is that of ‘Knowledge of the Responsibilities and Privileges of Citizenship’, and this list includes the following:

The letter concludes by reminding the applicant that they are able to “make a new application for citizenship at any time”, and warning that before they do so they are recommended to “carefully review the reasons this application was refused, as well as the legislative requirements for citizenship”. Further information is then included as to the requirements for “an adequate knowledge of Canada and of the responsibilities and privileges of citizenship”. This takes the form of a verbatim copy of the above lists taken from Section 15 of the Citizenship Regulations, and is less than helpful in that it essentially repeats the information which has already been provided to the failed applicant in the section of the letter previous to this one.

Ultimately, this change to the way in which applicants are notified of failed citizenship requests is a change for the better. It has an appealingly apologetic tone and urges the applicant not to worry about this initial failure, and to try again in future. Further, for the first time it quotes the vague, ambiguous terms of the Citizenship Regulations, and now, at least, the applicant knows where they went wrong. Before, one had to guess.

It is no surprise that this system has been overhauled, and we can likely expect many other changes to the way in which the Canadian citizenship grant functions in the coming months and years.

Do You meet the Residence Requirements?

Canadian Citizenship by Descent Tool – Are you a citizen?