In many countries every moment of our lives is documented with some kind of paper or electronic trail. But in many parts of the world that is not the case at all, and immigrants can sometimes have trouble coming to Canada because their home country doesn’t have the same documentation standards as Canada. But part of the problem, funnily enough, is Canada itself.

What is an Apostille?

The first country that has documentation issues if you are trying to convince Canadian authorities of the veracity of your document is Canada itself. The reason for this is that Canada is not a signatory to the Apostille Convention signed in The Hague in 1961. What is an Apostille? It’s a stamp that certifies the signature and the correctness of the stamp or seal on any document which must be certified in another signatory country, and is a way of providing a manner of authentication of documents across international boundaries. All of Europe, most of Latin America (Brazil is not a signatory) as well as the USA, Japan, Australia and New Zealand are signatories. South Africa and India are as well,o but China is not. That means, for example, that getting your foreign academic credentials certified in Canada, is especially tricky and can be a bit of nightmare. So should Canada send John Baird on the next flight to The Hague and sign Canada up to the Apostille Convention so a nice little red stamp from Venezuela, for example, gives a document the go-ahead in Ottawa? 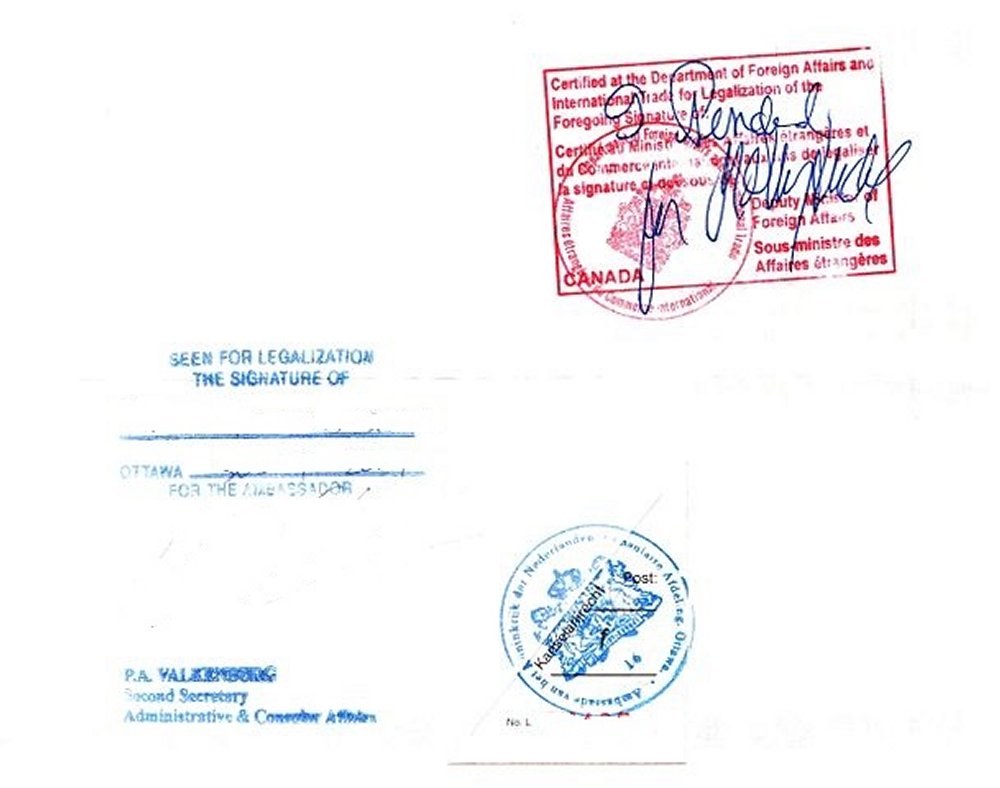 Maybe not so fast. It’s precisely with academic credentials that the Apostille Convention has admitted that they have a credibility problem. An Apostille seal only verifies the signature and the stamp or seal on the document (a stamp of a stamp if you will), not the underlying document itself. That means that if the issuing country’s authority deems the official signature and seal correct, they have to add an Apostille, even on a certificate from a diploma-mill of dubious value. As a result, the Convention has placed a disclaimer – or clarification if one wants to be diplomatic – stating “This Apostille only certifies the signature, the capacity of the signer, and the seal or stamp it bears. It does not certify the content of the document for which it was issued.” While the Apostille Convention was intended to reduce paperwork, it remains dubious as to how effective a certification it is if it can’t provide any guarantee on the veracity of the underlying document. And it may be some time before Canada signs up, to say the least.

As an aside, for those Canadians moving abroad who require Apostilles on certain documents in the country which they are moving to, there are certification services in Canada that provide a sort of super-notarization of the specific document, which is then accepted abroad as a quasi-Apostille. Canadians migrating abroad can also avail themselves of consular services abroad. For those migrating to Canada, they will have to authenticate their documents without being able to rely on the authority of an Apostille. In fact a document with an Apostille seal on it will not be accepted in Canada and the migrant will have to obtain a new version of the document that does not have the Apostille seal on it.

Another problematic area is that of birth certificates. A birth certificate is the first official record of someone and is the basis of many other documents, including passports. In some countries, as outlined in a UNICEF report on unregistered children, problems with infrastructure, access, and even parent’s willingness or awareness of the importance of registering their newly born children can mean that many go unregistered. The fees charged may also be excessive for lower income parents. As the report states, Article 7 on the Convention of the Rights of the Child states that every new born child shall have:

Aside from these countries, other countries have relatively low registration rates compared to those in the developed world. Some examples of populous or semi-developed countries with registration problems:

According to UNICEF, there has been progress made in countries like Brazil which increased its rate from 64% in 2000 to 93% in 2011. Other examples are Vietnam from 73% to 95% and Bangladesh, from 12% to 31%. Clearly, the higher the registration rate, the more sound the country’s documentation system and the more reliable any other documents issued by the country.

Another problem specifically for Canadians who want to get married abroad is that Canadian passports do not show civil status, unlike other countries. For reasons of privacy perhaps, we do not give out that information on an identity document like a passport which means Canadians who are planning to marry abroad must do one of two things:

An issue often arises over a country’s visa policy, especially when it is not reciprocal between any two countries. Canada only allows visa-free travel into the country for a relatively short list of countries:

It is advisable to check for any changes to this list as Canadian policy is subject to change and countries may be added to or taken off the list. For example, Bulgaria and Romania are not on the visa-free list of EU countries as regards Canadian policy.

Get a Visa to Canada

Many of the countries whose citizens are required to have a visa to travel to Canada allow Canadians visa-free travel, however, to their own countries. Most of Latin America falls into this category – with the exception of Brazil for which Canadians do need a visa – as well as South Africa and a few North African countries like Morocco and Tunisia. In these cases there is no reciprocity and it seems to be an issue that is tied to immigration. Canada imposes visa requirements on travelers from this group of countries to try and counter attempts at illegal immigration. India is a special case since they impose visa requirements on much of the world which in turn imposes visa requirements on Indian citizens. There are currently plans to try and streamline India’s visa system and allow visa-on-arrival for a number of countries but disagreements between various ministries within the country – it seems to be a conflict between reciprocity and security concerns – have delayed implementation.

Canada, since 2013, has also added biometric requirements to any temporary residence visa issued to citizens from the following list of countries:

Clearly this list reflects security concerns on the part of the Canadian government as well as concerns regarding the quality of documents issued by authorities in these countries. As the world moves towards e-passports, and biometric identification becomes more and more common, how easy it will be to have documents accepted in Canada will depend on ever-evolving Canadian policy as regards the source country of the documents. Migrants to Canada will have no choice but to continually keep up-to-date on the requirements regarding their specific country.

How to get a refugee travel document in Canada.

Acknowledgment of Receipt for Immigration (AOR)

How to Get Your IELTS or CELPIP Test in Canada vs. Abroad for Express Entry