Fidel Castro was an honorary pallbearer at former Prime Minister Pierre Elliot Trudeau’s state funeral in early October, 2000. That tells you something about Canada-Cuba relations. You may agree or disagree with the politics of the Cuban strongman and former head of state of the America’s only communist regime, but Canada as a country has maintained relations with the Caribbean nation in an uninterrupted fashion. In fact in the Americas, only Canada and Mexico have maintained uninterrupted diplomatic ties with Cuba since the 1959 revolution.

Fidel Castro was an honorary pallbearer at former Prime Minister Pierre Elliot Trudeau’s state funeral in early October, 2000. That tells you something about Canada-Cuba relations. You may agree or disagree with the politics of the Cuban strongman and former head of state of the America’s only communist regime, but Canada as a country has maintained relations with the Caribbean nation in an uninterrupted fashion. In fact in the Americas, only Canada and Mexico have maintained uninterrupted diplomatic ties with Cuba since the 1959 revolution.

In the late 18th century, sailing vessels from the Atlantic provinces traded codfish and beer for rum and sugar from Cuba. A few short years later in 1820, Thomas Jefferson – a founding father of the U.S. – surmised that Cuba was “the most interesting addition which could ever be made to our system of States” and told the then Secretary of War that the U.S. “ought, at the first possible opportunity, to take Cuba.” John Quincy Adams described Cuba as an apple that if severed from Spain would gravitate into the orbit of the U.S. In other words, Canada’s republican neighbour has coveted Cuba for as long as the republic of the United States has existed. Add the Spanish-American War in 1898, fought largely over Cuba, and which the Cuban call “the US intervention in the Cuban War of Independence,” and you have a recipe for interference and resentment. The US had offered to actually buy Cuba before the Spanish-American War and had thought of annexing the island by force after the war, with US troops already on the island. But instead they maintained a firm hand in the island’s affairs: troops were often sent back to Cuba in the first decades of the 20th century. Finally, a more economic-based relationship was established with political interference in the background. When the Cuban revolution succeeded in overthrowing the Batista regime in early 1959, the relationship between Cuba and the USA became combative, with the U.S. closing its embassy in early 1961, after expropriation of American companies by the Cuban government.

Canada, as a partner of the U.S. in NATO and in NORAD had to tread a careful path. Then Prime Minister Diefenbaker insisted Canada pursue an independent foreign policy, so the Canadian embassy stayed open. But at the same time, the Canadian government supported and participated in the naval blockade of Cuba in 1962 when the USA and the Soviet Union came close to nuclear warfare. Canada drew the line, however, at economic sanctions and continued to maintain diplomatic relations with Cuba, despite pressure from the U.S. The Canadian embassy, which opened in 1945, stayed open. Pierre Trudeau visited Cuba in 1976 and developed a lasting friendship with Fidel Castro, much to the irritation of Washington D.C. In recent years, the Canadian government has had a stronger emphasis on human rights, but the embassy has always remained open for business. If we can trade with China, why not Cuba? 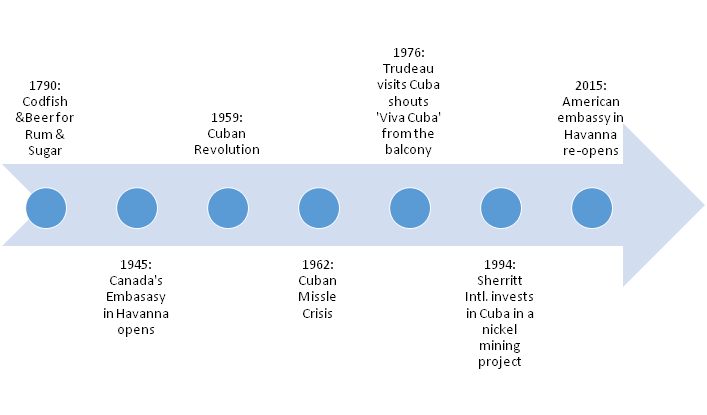 The continued diplomatic relations throughout the decades following the revolution have meant cultural and economic ties have grown between Canada and Cuba. For example, did you know that?

Now is the Time

Canada’s current position is one of encouraging Cuba to embrace the values of freedom, democracy, human rights, and the rule of law. At the same time, Canada also recognizes Cuba’s commitment to economic and social rights. In other words, the balancing act is still something Canada has to maintain without angering the USA. The fact that relations between the U.S. and Cuba seem to be taking a turn for the better means that balancing act is now a little easier to achieve than in years past. In fact, Canada helped facilitate secret negotiations between Cuban and American officials at various locations in Toronto and Ottawa. These negotiations led to the re-opening of the American Embassy in Havana in August, 2015. Canada was thanked by President Obama for our role in those negotiations. And with everything from Canadian jazz musicians to businessmen travelling to or even living and working in the island, our relationship with Cuba has been strengthened by Canada’s independent foreign policy.

That will change however, as relations between Cuba and the USA are normalized. Tourists from America will flood the island, the bargain deals will disappear and the pristine beaches become ever more crowded. Cuba will still be a fun place to visit, even more so as the country lifts restrictions and as economic reforms drive prosperity for Cubans. Whether Cuba will turn her back on her steady Canuck companions and allow herself to be whisked away by her flashy and wealthy neighbour just to the north, remains to be seen. But this shift towards the USA will not happen overnight. Rather, it will take a number of years. Both Cuba and the USA need to change their legislation in order to lift the blockade and allow free travel between their countries. So the time is still ripe for Canadians to visit Cuba and enjoy a unique island in the Caribbean.

Do it But Do it Right

With over a million Canadians heading to Cuba every year to enjoy the beaches and the culture, some fall in love. And sometimes they get married. And sometimes they get exploited by a Cuban interested only in moving to Canada rather than in the relationship. As we have explained before in an article, it is best to be certain of the intentions of your Cuban partner before proceeding to marriage. A prenuptial, for example, is always a good idea. Whatever your reason to travel to Cuba: sun and sand, academic exchanges, development work, or business; it’s always possible that you might have to start planning on bringing your new-found Cuban partner back to Canada.

Are you planning to live in Canada with your spouse?
Here are some helpful articles:
How to get married in Canada to a foreigner?
Can I bring my boyfriend/girlfriend to Canada?
Free Spousal Sponsorship Course
Paid Support from Immigroup: Sponsorship

Bringing Your Filipino Spouse to Canada

Can I Bring My Boyfriend/Girlfriend to Canada?

Bringing your American Partner to Canada

How to Prove Single Status for Marriage Abroad

Bring Your Mexican Spouse to Canada in 2 Steps

Bringing Your Jamaican Spouse to Canada

Bringing Your Vietnamese Spouse or Partner to Canada

Proving You Are Single in the Balkans

Canada vs. Philippines: How to Make a Filipino Resume Canadian

How to Get Through Cuban Customs

Top 4 Ways to Keep in Contact With Your Cuban Spouse

Is Gay Marriage Now Sort of Legal in Cuba?